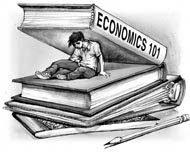 The year 2008 will surely go down as the one in which Economists were proved to be the dumbasses that many of us suspected they were for many years. The more you ask their collective opinions these days, the more ridiculous they seem. Below is an example from Brazil. Surely 26 out of 27 economists can’t be wrong……..

So read this and think about how cheap MELI is these days. They don’t sell many cars, either.

By Jeb Blount and Katia Cortes Dec. 16 (Bloomberg) — Brazil’s retail sales rose more than expected by economists in October, indicating that consumer demand in Latin America’s biggest economy is holding up against the global credit crunch.

Sales surged 10.1 percent in October from a year ago, led up by a 44 percent climb in computer sales, the national statistics agency said. The increase exceeded the forecasts of 26 of 27 economists in a Bloomberg survey and was higher than the 9.3 percent sales growth yada yada continues here