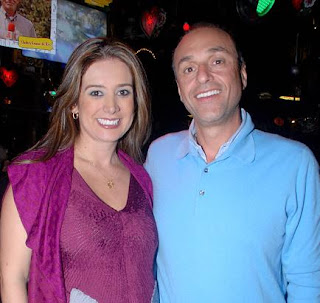 It was all smiles last week at the big bash to celebrate 20 years of Colombia’s “investigative” TV journalism show, CM&, at Andrés Carne De Res in Bogotá. In attendance was our loveable litigating jet-setter Serafino Iacono of Gran Colombia Gold (GCM.to) amongst other minor investments such as something called Pacific Rubiales. But wait! Who’s that giving it big teeth with our extractive industries magnate? Why it’s María Paola Mejía Arango, the presenter and pretty face of the CM& program itself! Isn’t it nice to see that they’re such pally pals? Now isn’t that the darndest coincidence?
After all, it kind of explains why on January 2nd the prime-time edition of CM& and María Paola Mejía ran a full 10 minutes of Serafino Iacono and other GCM.to flunkies, who were given carte blanche to put forward their case for the development of the Marmato open pit gold project. In that show it was one-way traffic and not a word about the highly polemic and controversial nature of the project, which made local blogger Giraldo Rivera more than suspicious at the time. He wrote about the 10 minute TV slot (translated):

“…they had 10 minutes in the news show CM& (last January 2nd) where they came across as the saviours of the whole municipality and the generators of culture in a zone where, according to them, the local population cannot decide what’s best for them…”

Neither was there any comment from the majority of locals who vehemently oppose Serafino’s land-grab. And strangely enough, scant attention was paid to the recent murder of the local priest at Marmato who just coincidentally was the main player in the opposition to Serafino’s mine plan. Until he was killed, that is.
Anyway, we’re glad María and Serafino had such a pleasant evening out together. The photo and more besides of Serafino and his influential media buddies found at this Colombia gossip site, named (and I kid thee not) “jet set dot com”.