…in IKN374, the price of this famous-name shell has popped from 52c to 75c. That 44.2% and that’s not a bad little move for this stock. We also found out (thanks to sources who read The IKN Weekly) that OLA is in discussion with Pershimco (PRO.v) about its Cerro Quema property in Panama. That development was covered in this post earlier in the week.

Orla
Mining (OLA.v-H): Something is brewing
Up until recently Orla Mining
(OLA.v-H) was a ten cent shell stock sitting on the NEX end of the TSXV and
doing nothing. That’s now changed, as this 2016 price chart shows. 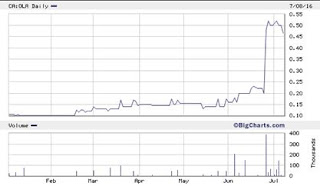 So far in price moves we’ve seen:
At face value that’s quite
impressive for what’s nothing more than a shell at this time, but once we check
out a few of the details of the company it becomes more obvious why this shell
is creating noise. To do so, let’s zero in on the company’s latest NR dated
July 8th  in which it
announced the closure of a $7m round of financing (28). This was the funding
round of a soon-to-be unleashed new junior on the block. Its backers have
already got in on various rounds of early financing at cheap prices (6c, 8c,
10c) from mid-2015 up to February 2016, but it’s when you see the names of the
main players that things start to get interesting. After this latest 50c
financing round in which they all participated, Marc Prefontaine, Hans Smit,
Troy Fierro, Richard Hall, John Graham and Pierre Lassonde between them own a
total 66.3% of Orla’s fully diluted share count and if you don’t recognize
those names as the top table A-Team of the Canada mining scene, then I suggest
you change your sector of interest immediately. Just seeing one or two of those
names connected to a start-up junior would be enough for my blood, all five and
the bells should be ringing already.
As for what it owns and plans to
do, its flagship property at this point is the Blue Quartz project which is
described in these terms in its most recent MD&A:
The Blue Quartz Property is located approximately 12
kilometres north-northeast of Matheson, 73 kilometres east-northeast of Timmins
and 56 kilometres northwest of Kirkland Lake, all located in the Province of
Ontario.
It then goes on to describe Blue
Quartz in more detail, including the results of limited drilling programs back
in 2010 and 2011 which returned hits such as 2.0m of 13.95 g/t gold at a depth
of 340m. It finishes the description with “To date the mineralized zone is open
to depth and down plunge with indications that the hydrothermal alteration
system is increasing in intensity along with both the grade and width of the
mineralization”, which is probably going to be connected with the promo on this
stock if Blue Quartz turns out to be the main thrust of OLA this year. However,
OLA may have other plans and a new project to fold into the company, I have no
special information to offer you on that.
All in all, just the calibre of the
mining men on board this play makes it very interesting and with the $7m
placement now signalling that the company is about to come alive, this is your
heads up on a potential exploreco trade for the second half of 2016. At present
I do not own any shares and I don’t plan to change that in the near future. If
I decide to buy I’ll tell you first.

Disclosure: I neither own or recommend OLA or PRO.