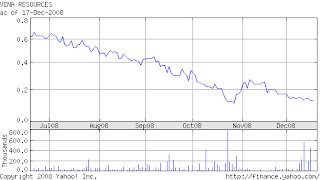 Note the recent volume…..
Vena Resources (VEM.to), beaten back to where it bounced the last time, has published on its coal start-up business in Peru. Read the PR yourself and pay special attention to the fact that the company doen’t have a price fixed for its goods yet, but all the same this is an easy and technically simple way of adding alsmost immediate cashflow to the company.

You need to DYODD on the company (as always) because I have two vested interests:

2) I like the company and how it’s going about its development program under tough market circumstances.

But there’s no doubt it’s cheap, and there are far, far worse pennyflip possibles out there. Have a look at the PR, and if you want to investigate further here’s a link to the VEM.to website

TORONTO, ONTARIO–(Marketwire – Dec. 17, 2008) – Vena Resources Inc. (“Vena” or the “Company”)(TSX:VEM – News; LIMA:VEM – News; FRANKFURT:V1R – News) is pleased to announce the acquisition of its first producing coal project with plans to increase tonnage deliveries to a large Peruvian cement manufacturer. The property is currently being mined at a very small scale; however the Company has received an order for a minimum of 2,000 MT of coal per month, with the option of increasing it up to 6,000 MT per month in the near term. The Company plans to confirm non-43-101 compliant resources and to continue to sell coal to local cement and steel manufactures. Vena is also pleased to announce the appointment of Ing. Luis Moran as General Manager of Peruvian operations. Mr. Moran is a chemical engineer with an exemplary track record in the Peruvian mining industry. He has been on the board of directors of Centromin Peru as well as Minero Peru SA and held the position of general manager for San Ignacio de Morococha Mining Company, Castrovirreyna Mining Company as well as general manager and president of Hierro Peru (ex – Marcona Mining Company). Mr. Moran also held the position of Vice President of the Special Privatization Committee for several large Peruvian mining companies (Tintaya, Centromin, Minero Peru and Hierro Peru).

The Oyon Coal Property – The formation containing the coal seams corresponds to the Oyon formation of the lower Cretaceous age. The main structure controlling the location of the identified coal seams corresponds to an asymmetric syncline with a north-south bearing; the coal seams outcropping along its west and east flanks. A number of coal seams have been identified within the mining concession with thicknesses that vary between less than one metre and exceptionally reaching four metres, all of them hosted in dark gray slates and gray sandstones of the Oyon formation.

The Alexia and Micaela seams are the most outstanding due to their geological characteristics and their relative continuity outcropping for over 670 metres, their average thicknesses being 4.0 metres and 2.0 metres, respectively. The Alexia seam has been partially exploited but the old workings are currently collapsed due to the inadequate mining method previously used.

The results obtained from chemical analyses of channel samples taken show that ash content ranges from 6.0% to 31.5%, volatile matter content is moderate to low, ranging between 8.8% and 16.0% and fixed carbon ranges between 58.3% and 82.5%, whilst sulfur contents are all below 1%.

A preliminary field evaluation and review of historical production and exploration records, including mine development plans and an EIA application submitted to the Peruvian government by the previous operator performed by Vena’s consulting coal geologist, Dr. Rolando Carrascal PhD, has so far identified estimated historical coal resources in the range of 620,000 TM to 700,000 TM and a prospective additional tonnage ranging between 130,000 MT and 150,000 MT. The Company plans to conduct an exploration program based on Dr. Carrascal’s guidance leading to a NI 43-101 complaint report in 2009.