Slap! Twobreakfasts shows why he’s so darned popular in Peru 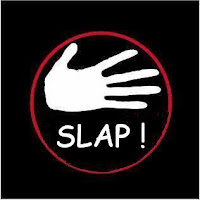 The following is directly translated from this report out of Spain’s Terra newswire, Peru bureau:

The President of the Republic of Peru, Alan García, assaulted a young man at the Edgardo Rebagliati EsSalud hospital, after he called García “corrupt”, according to a report published today in the newspaper ‘Diario 16’.
According to the newspaper, García was in the middle of a crowd of people on the first floor of the C wing of said hospital when suddenly the young man aged 25 shouted at him “Corrupt!”. At that moment the Head of State asked “Who said that?” and the young man responded “I did!” while signalling his own chest. The Head of State went up to him and immediately slapped him in the face with his left hand.
Instead of backing off, the young man, followed García asking him about ‘freedoms of expression’ or ‘his right to a free press’.
President Garcia left the building surrounded by jeering whistles and insults from the people who witnessed the scandal. It is understood that three members of the President’s personal security corps intercepted the young man, handcuffed him and beat him. Although his whereabouts are currently uncertain it seems that he was at the time interned at the hospital.

Pretty disgusting, but nothing that surprises those who actually follow what this lump of lard says and does on a daily basis. So now to the silver lining, a chance to view this again. Click and enjoy.