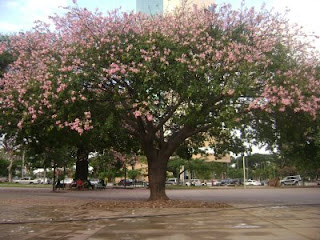 The Toborochi Tree of Santa Cruz flowers in May.
Masonic lodges are known to like symbolism. Just sayin’.
El Gaviero today picked up on reports from Bolivia that dead mercenary gang leader, Eduardo Rozsa Flores, was hired under a false name by the Santa Cruz COTAS telephone company. Why is this significant? Let me count the ways:

1) Why hire somebody under an assumed name if there’s no skullduggery going on?

2) Note that arsenal of weapons found after the shootout and death/arrest of the gang of five? Yep, they were found hidden at a trade fair in the COTAS stand (the C-4 wisely in the fridge, considering the heat this time of year). Funny that, innit?

3) Remember those secret, unofficial and non-associated masonic lodges in Santa Cruz I wrote about last week? Well surprise surprise, it’s well-known that COTAS is controlled by the very same people that head up those two “Toborochi” and “Caballeros del Oriente” lodges.

4) Some claim that COTAS is under one lodge’s control, some claim the other. Some note that the two lodges split with each other after a spat in the early 1980’s, other say they’ve mended relations and work in cahoots nowadays. Some say that Ruben Costas heads up Caballeros del Oriente, but nearly everyone says that Branko Marinkovic is the head guy at Toborochi.

Nuff said. That poor sap Dwyer really had no idea of the trouble he was letting himself in for.