So how are those Peru mine development projects getting on, Otto?

Oh, just about as you’d expect.
While searching for something completely different earlier today, I came across this slide from this presentation made by Peru’s main Geological Mining and Metallurgical Institute, INGEMMET, back in 2014. For what it’s worth, these are the people the government of Peru rely upon to give accurate forecasts of future developments and production timelines for mining projects in the country and the source for those puff pieces you’ll come across when Peru does its presentations at PDAC and suchlike. Anyway, this one has a nice handy map of the country upon which are the names of a whole bunch of projects and…here’s the interesting bit…the year that INGEMMET said the project would go into production: 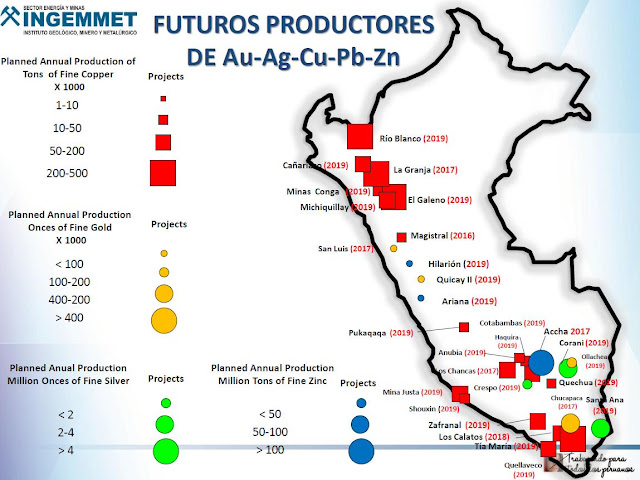 Therefore we now know that:
Chucapaca (BVN, now called San Gabriel), Accha (Zincore) La Granja (Rio Tinto) and San Luis (SSRM I think, but it’s been some time) and Los Chancas (can’t remember) went into production last year, 2017. Los Calatos (ewww, ex-Metminco) went into production this year and Magistral (Nexa/Milpo) has been operating for the last two years.
Next year 2019 a whole bunch of projects have their first year of production, including Quellaveco, Tia Maria, Zafranal, Shouxin, Mina Justa, Pukaqaqa, Michiquillay, Conga, Cañariaco, Santa Ana, Quechua, Corani, Crespo, Haquira, Anubia, Ariana, Quicay II, Hilarión, Cotabambas, Ollachea, Galeno and Rio Blanco.
Fascinating, yeah? Because the funny thing is that none of them are in production yet. Pukaqaqa is close, Mina justa and Quellaveco have started construction, Michiquillay is going to get its first full year of development before any firm construction decision gets made, San Gabriel can’t seem to make up its mind andif memory serves, Crespo isn’t far off happening. As for the others, don’t pick a year, pick a decade.