So I get this question about Millrock Resources (MRO.v)… 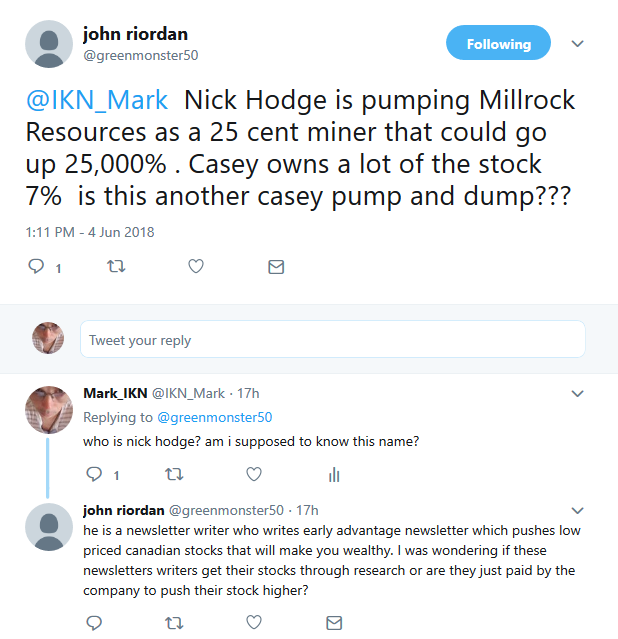 And yes, after about 15 seconds on the internetwebpipes indeed turns out that this Nick Hodge is another mining stockpick wealth make-yer-rich guru who plies his knavery on the green and foolish of this world (I’d pay more attention to them all but I can’t be arsed these days), he runs something called “The Outsider Club”* and yes, he’s pumping Millrock Resources (MRO.v) to his merry band on knownothings and doing this to the stock:

It won’t last. It never does. And guess who’s selling to the new buyers?
Anyway to answer JR’s question, in this case I’m not 100% sure whether MRO has paid people off recently to promo its cause, but I do know that it went with one of the established patterns of getting your name on the Newsletter Writer (NLW) cribsheets a couple of years ago. That’s because when it ran its seed financing round, it didn’t just offer the cheap shares with juicy warrants to friends/family/financiers and those people who would form a core of loyal shareholders from the start. Instead MRO went out into the wild woods of Vancouver and offered chunks of its flesh to a whole bunch of NLW, including Casey of course (natch) but also a whole range of others. And without knowing for sure, I’d bet yer man Hodge was on the list.
So cut to a couple of years later and for whatever reason, Hodge decides he needs a liquidity moment to dump either his own shares, or to allow one of the NLWs in cahoots with him to get hers or his out. That’s when you suddenly get a breathless spiel for the stock, which pops hard on volume and a new set of bagholders are created. Therefore JR, I don’t have the certain knowledge and cannot be bothered to find out either (the less time spent in the company of these nefarious merchants of sludge the better, I find) but I’d bet a dollar to a donut the above is significant part of the equation. All legal, but legality and morality are two very different subjects.

*Because ain’t it cool that you’re an outsider and there’s a club specially for you…filled with outsiders…oh lordy shoot me now.