So let’s see if this Hague court thing works…. 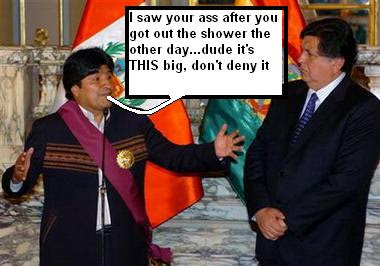 Your IKN libellous photo du jour
In response to the 2003 massacre of 67 people in the so-called “gas wars” of El Alto Bolivia, Bolivia has this idea of putting the alleged perpetrators on trial. These people are members of the last Goni gov’t, of course, and include ex-Prez Goni who is hiding out in LandoftheFree as he finds the language easier up there.

So you’ll recall that just before the trial started last week, three of the accused skipped Bolivia and went to Peru, asking for political asylum and claiming political persecution. Peru duly made its decision that they could stay without giving a single reason as to why it would hide yet another bunch of accused criminals.

The thing is, what Peru has done here, namely decide to harbour people under criminal charges, is against the laws of asylum and what’s more against the laws of Peru itself. The case of Manuel BraveSirRobin Rosales from Venezuela to Peru is laughably thin, but at least he wasn’t under formal charges when he legged it as his process hadn’t got quite that far. But these Bolivian dudes just skipped over days before their trial started, having been allowed freedom of movement in the preparative stage. Hardly draconian.

Thus yesterday, Bolivia decided it would go to the Court of Human Rights in The Hague for a ruling on Peru’s decision to harbour their accused with impunity. Of course Peru is throwing up its hands in mock horror, saying that Evo Morales faces an “international fiasco” if he goes ahead with this Hague idea. But y’know, I’m not so sure…from where I’m sitting Evo has very little to lose in the deal and might just singe a few beards on the way to getting his accused back. On the other hand Peru has an awful lot to lose, starting with the Twobreakfasts’ worst nightmare: loss of international face.