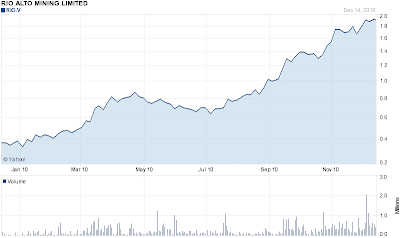 This hit the Bloomberg terminal service (i.e. not public web) wires yesterday and as it’s now being partly reported on the interwebnetpipes, we’ll paste it out. On reading the headline you gotta think he likes where the company is heading. DYODD, dudette&dude.

Rio Alto Stock Will Likely Quadruple Next Year, COO Black Says
2010-12-14 19:06:30.660 GMT
By John Quigley
Dec. 14 (Bloomberg) — Rio Alto Mining Ltd., the best-performing stock in Peru’s main index this year, will quadruple in 2011 as it starts producing gold and explores for reserves, said Alex Black, the company’s chief operating officer.
Rio Alto’s La Arena mine in Peru’s northern Andes region will probably yield its first gold by the second quarter and is likely to produce 70,000 ounces next year, Black said. High metals prices will also help propel the shares, he said.
“We should be a $500 million to $1 billion company next year,” Black said in an interview in Lima today. “There are plenty of other companies that have valuations two or three times more than us with assets that are not quite as robust or big as ours. As long as metals prices stay strong, we will see that price appreciation in our stock.”
Rio Alto, based in Calgary, has surged fivefold this year, the steepest advance in the 36-stock Lima General Index, after announcing in July that La Arena would start processing ore this month. Gold surged 29 percent this year to a record $1,432.50 an ounce on Dec. 7 after investors lost confidence in currencies
and bought precious metals as a protection of wealth.
Rio Alto lost 0.5 percent to $1.89 at 1:33 p.m. New York time today.
To contact the reporter on this story:
John Quigley in Lima at +511-614-6811 or
jquigley  at bloomberg.net
To contact the editor responsible for this story:
David Papadopoulos at +1-212-617-5105 or
papadopoulos at bloomberg.net