So whatever makes you think the Twobreakfasts government is corrupt, Otto? 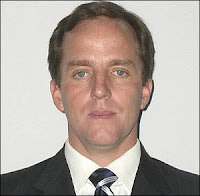 Francis James Allison (for it is he)
Oooooooooh…just an inkling of mine.

On November 5th (but the news just came out today), a dude named Francis James Allison Oyague was arrested in Miami airport. Now this guy just happened to be Minister of Housing in the Twobreakfasts government until very recently, when he was forced to resign because it turns out he had close links and dealings with a company called Business Track (BTR). By way of quick background, if you remember back to this IKN post in January it turned out that BTR were illegally phone-tapping all and sundry in Peruvian political and biz circles.

So, this Peruvian cabinet minister Allison had been collecting cash from a bunch of industrial spies before becoming minister. He “forgot” to mention the connection at the time, was found out and then resigned.

So that brings us up to this month when the Allison dude was arrested along with his wife by US ICE customs officials for contraband and false testimony as they tried to smuggle over U$50,000 in cash out of the USA stuffed in their pockets. Here’s a PDF link to the criminal complaint and it says that:

Slush funds for governments anyone? This one could run and run.

UPDATE: Now the top story in El Comercio (and all other media) in Peru