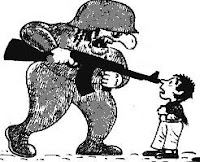 After listening to PM and dumbass Yehude Simon say last night that Peru’s gov’t was “not weak” in the face of protests, this morning we have news that the Armed Forces have been given authorization to intervene in troublespots, such as Cusco, Andahuaylas (11 day protest and counting) and of course the Doe Run Peru (DRP) roadblock at La Oroya, which happens to be on a strategically important highway. The measure is by decree and lasts for the next 10 days in the Cusco, Apurimac and Junin regions.
Also, Gran Combo Club made a very sharp observation over the weekend when comparing El Comercio (Peru’s lapdog newspaper of record) and its current coverage of Peru’s social troubles with Chile’s El Mercurio in the 1970’s and 1980’s when Pinochet was in power. Here are the two examples shown in GranCombo for those of you versed in the local language. 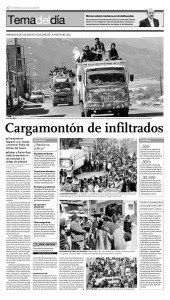 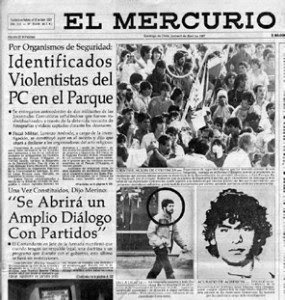 The similarities of blaming “infiltrators” for any social problem is disconcerting…to say the least.

Now I gotta run. Have a cool day, people.