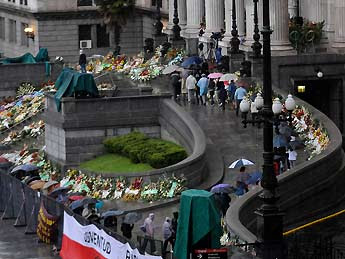 Clarin now estimates that 70,000 people have filed past and paid respects to Raúl Alfonsín as he lays in state. The line was non-stop all through the night and also this morning under heavy rain. His cask is about to be taken from Congress to his final resting place, and so this will be IKN’s final post on South America’s biggest story of the week, nay year.

Meanwhile, the following countries have marked the death of Alfonsín by declaring days of official nation mourning; Colombia, Brazil, Paraguay, Uruguay, Chile, Peru. Notably, the countries that suffered the most under far-right military dictatorships are those to step up and officially doff their caps to Alfonsín. It’s times like these that you realize how much South Americans understand and appreciate their own history. Be clear that all the above listed countries will be remembered by Argentinians for their gestures of goodwill.

Equally, it’s times like these that you realize just how little people outside the region know or care about South America, as the passing of a great democrat has caused hardly a ripple in the psyche of the wider world. So be it. That will surely be remembered, too.