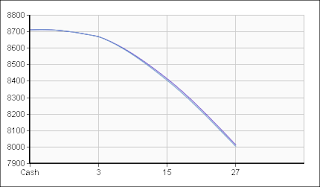 This looks like a smart, deep-pocketed play. Here’s the Reuters version:

SINGAPORE Dec 3 (Reuters) – A single trader is holding up to 80 percent of copper stockpiles at the London Metal Exchange, the Wall Street Journal reported on Friday.
The dominant position holder, who was not identified, owns between 50 percent and 80 percent of the 355,750 tonnes of copper held in LME listed warehouses, the newspaper said, estimating at least half of the holdings at about $1.5 billion.
The exchange first disclosed the large position in its daily inventory holder report on Nov. 23, the newspaper said. CONTINUES HERE

A single trader has gobbled up to four-fifths of the copper traded in London, stockpiling it in warehouses.

The unknown buyer has been building up the dominant position since at least last week, putting a squeeze on the market.
According to the rules of the London Metal Exchange, the trader must lend out copper if it holds between 50pc and 80pc of the total to maintain day-to-day liquidity in the market. The trader is currently lending at a 0.5pc premium to the cash price.
The premium for spot price copper over delivery in three months’ time reached $89 in the middle of this week – the highest in two years. CONTINUES

But want for volatile? Yeah, this one could get volatile.