This humble corner of cyberspace has warned about this stock and the way in which its awful local community relations will screw the pooch for months on end. In its time it’s also been pumped to kingdom come by newsletter brigade members such as Brian Lundin, Lawrence Roulston and Scientologist scumball Michael Baybak, who was stupid enough to say that South American Silver (SAC.to), we quote, “has worked out how to operate in Bolivia“.
Well work out this one, dumbass. Today’s news from Bolivia linked here, translation below:

Locals demand the cancellation of a mining concession awarded to a North American company “without consultation”. Police await orders to intervene. 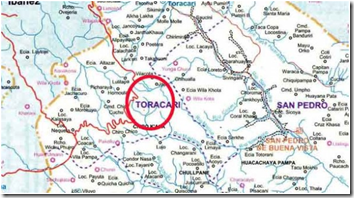 The inhabitants of the Mallku Khota community, located in the municipality of Sacaca, North of Potosí, yesterday took as hostage two more people who entered into the locality in an ambulance to give medical attention to a police officer captured and injured last weekend.

Up to last night, the two people were still being held by the local community who demanded the presence of Governor Félix González in order to hold dialogue.


Regarding the case, the [Potosí] departmental authorities say that the tense situation in Mallku Khota is due to the intransigence of the local community, who refuse to let the South American Silver mining project move forward in the region.


Unofficially, they said that the two people held hostage are the ambulance driver and his assistant. “The situation has got worse, the police officer is still being held hostage and there are now possibly two more [hostages], the ambulance driver and his assistant”, they worriedly said, explaining that they were health service personnel from the Sacaca municipality.


González today announced he would travel to the zone in order to try to reach a solution, although he said that the issue was the specific field of the Ministry of Mining and of the Mining Corporation of Bolivia (Comibol).


Conditions
The community has set out two conditions for the release of the police officer who was taken hostage last weekend after a confrontation when 10 police officers, along with a Sacaca fiscal, attempted to officially notify ex-leaders of the community [of legal actions against them]


The Mayor of Mallku Khota, Cancio Rojas, said that the community demands the cancellation of the mining concession that the government gave the North American company and close the legal actions brought against ex-leaders of the community by the Fiscals.


He noted that the ex-leaders, Paulino Choque, Gilberto Choque, Andrés Chajmi and Francisco Chajmi has arrest warrants against them due to legal processes brought against them by South American Silver, because they had led the move to expel them from the zone.


“The company accuses those who ran them out of town in 2010 and 2011. That happened according to our decision to tell the company to leave the area, but they didn’t pay any attention to us and so they were thrown out by force”, he said.

Strange how SAC.to CEO Greg Johnson (ex-Nadagold, dontcha know) has kinda always all-the-time forgotten to tell the market and his shareholders just how bad the relationship is between his company and the locals for years (not months folks, but years), isn’t it? Instead, rather than keeping you all up to date with the shitstorm his company created with locals after he allegedly polluted the local lake and killed all the locals’ fish stocks, he was all busy raising cash from a bunch of naive Chinese investors (who will now find out what “repent at thy leisure” means, first hand). So if you’re wondering why the drilling program SAC.to has been on about hasn’t happened for the last year, wonder no longer.