On October 23rd, when discussing the upcoming presentation and informative talk to be given by Southern Copper (SCCO) as part of the Tia Maria copper project’s re-started environmental impact permitting process, in the Islay region of Peru, the company spokesperson recognized that there was significant opposition to the project and protests may occur, but also said, “If we see that there’s no way of guaranteeing safety for the talk we won’t do it”.
Yesterday October 24th the meeting went ahead. Here’s an extract from how La Republica reported on events this morning (translated):

The workshop started just after 6pm. A few minutes later, a group of protesters started banging on the door and accusing the people participating in the workshop of not being from the zone (affected by the eventual mine).
As the violence increased, the members of the presentation committee, Alberto Dáiz representing the Ministry of Energy and Mining and José Vargas the project manager, continued their presentation as if nothing was happening (outside). Several masked protesters, who said they were local farmers, began to get violent and threaten the hired Southern Copper security personnel and police officers.
José Vargas apparently did not hear the shouts from the protesters and continued to quickly explain about the project. Those present at the workshop, now becoming more nervous, started gathering at the front of the hall. Some women started crying. But Vargas asked for a round of applause for the project. “We’re not going to give them the pleasure of interrrupting the workshop”, he said, while telling the presentation team to keep showing the presentation slides that were barely understood (by those present).
At 6:49pm a molotov cocktail was thrown from the street which landed on the fabric canopy covering the auditorium. The audience panicked, but the representative from the mine shouted out, “We won’t fall into their boycott!”.
Inside, fire fighters managed to put out the flames and the workshop continued. A few minutes later police officers began to come into the auditorium with injuries. “They were going to kill us”, said one of them with a fractured skull. Another nine of his colleagues were also bleeding.
The presentation continued while police outside launched tear gas at the protesters. At the same time, some of the participants in the workshop calmly asked about the benefits of the project. It all finished at 7:44pm. The mining company representative signed the presentation act along with members of the Mining and Energy Ministry. According to Alberto Díaz and José Vargas, the event had been a success.

continues here
And here’s how that successful event finished for the police officers mentioned above: 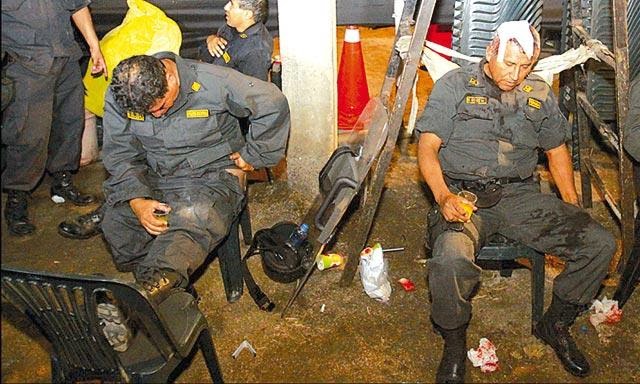