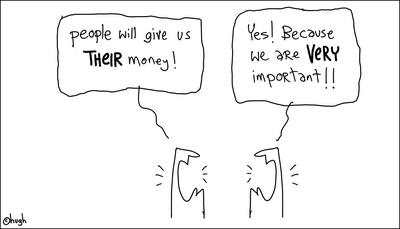 One of the things we try and do round these parts is open eyes up to the cruel and jawdropping reality that…...mining companies don’t always tell the truth to shareholders! Yeah, it’s an amazing one and goes against the grain, but my wild assumption is backed up by… ooooohhhh… what?….maybe 200 years of hard evidence in the stock market. That Mark Twain definition of a gold mine* hasn’t suddenly fallen into disuse for a very good reason.

So how to spot the sophisms and reality-stretchers? Well it’s often more of a feeling than an objective science, at least to begin with, but one of the many things to watch out for is an overdose of hype-ridden pump and eagerness to inform on the slightest piece of positive but an unwillingness to talk about substantial negatives in an open way.

An example: Check out ECU Silver’s Yahoo! page. Now check out the news releases page on its own website, too (same story). Here are the last four PRs from the company that are eager to tell everyone about its gold pour, its latest throughput achievements etc.

But the one that’s missing (and screamingly conspicuous by its absence) is the announcement the company should have made (as any decent company does) that its 1q09 results were filed on May 15th. This is a real, true substantial piece of news that’s conveniently forgotten by ECU.to, probably due to the fact that the company finances are in a dogshit awful state and management simply doesn’t want to attract attention to yet another multimillion dollar net loss. They certainly don’t want to point to the way current assets stand at $4.7m and current liabilities stand at $13.6m and that because of this, yet another round of dilutive financing is going to ream current shareholders at any given moment.

Another thing ECU.to doesn’t want mentioned is the way that, despite running yet another net loss, top management found time to award themselves nearly $600,000 in stock based compensation in the period. Another thing is how the company admits it will need to invest to become a producing mine but at the same time says it has no plans for investment….in other words it’s happy just pootling along until the very limited oxide resources are used up by its 500tpd smoke’n’mirrors operation that brings a gross of maybe a million per month and doesn’t have a chance of making the company cash flow positive. The list goes on.

The way ECU.to trumpets things like “swine flu updates” and “first gold poured” and forgets to mention serious, substantial facts such as net losses is typical of the scamster. Avoid this dog like the plague and any other miner that isn’t 100% straight with you on the news front.

*a hole in the ground owned by a liar