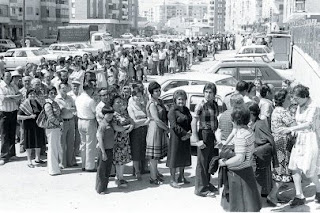 “No pushing at the back, please.”
Alex Dalmady’s blog is no more. I was given a headsup by a reader that “the link don’t work ottodude” last night and mailed Dalmady to tell him. He replied that he thinks he was hacked, there were pop-ups coming up on site so he killed the blog rather than go through a house of cyberpain. Fair enough…I hope he finds another outlet.

Meanwhile, if you combine this WSJ report about depositors arriving in Antigua to get their money out ASAP with this BusinessWeek report that includes this passage:

Then add a comment made by BigAl over at the clusterstock string following this story. He said that the contracts for US depositors were more stringent and included the two month delay as part of the deal. However LatAm depositors don’t have that clause to worry about. The upshot is that if the Latinos form an orderly queue in the next eight weeks or so, by the time the US depositors get the chance there might…MIGHT…not be any money left for them! ¡Viva el mercado libre!

If you play the Colombian Stock Market, you’d be very wise to make like a shepherd and get the flock out of there. Stanford is the 4th biggest player of that market according to BVC data. Some 90% of the moneyflow in the Colombian exchange is through bonds. Just sayin’, ok?

Finally, Antiguan regulators trusting and naïve? Surely not! Here’s a quote to remember from Reuters via Forbes (all the newsnames getting in on the act now):

“Unless we were duped, I don’t think it is (a Madoff-like scenario)”
Earth calling Antigua. You were. It is.