Here’s the note that kicked off IKN82, sent out to subscribers yesterday.

Don’t believe everything you read (especially in company news releases)
Reader and regular mailpal ‘MP’ brought a story to this author’s attention on Saturday that wouldn’t normally get picked up by your humble LatAm-centric marketwatcher. On Friday morning, Strateco Resources (RSC.to) announced in a news release entitled “Strateco Recieves (sic) Strong Support at Public Hearings on the Matoush Uranium Project” (1) that public hearings regarding its project in Quebec, Canada had gone swimmingly and love was in the air. Here’s how the NR began:
BOUCHERVILLE, QUEBEC–(Marketwire – Nov. 26, 2010) – Strateco Resources Inc…is pleased to announce that it received strong support at public hearings held in Mistissini and Chibougamau on November 23 and 25 in relation to the underground exploration phase of the Matoush project. Nearly 50 people, organizations, companies and local and regional authorities confirmed their support for the project in letters, briefs and presentations.
One of the supporters who tabled a brief in favour of the Matoush project was the Conference regionale des elus de la Baie-James (“CREBJ”), whose members include Luc Ferland, the Member of National Assembly for Ungava (Quebec), Manon Cyr, mayor of Chibougamau and Steve Gamache, mayor of Chapais, stressing the importance for Strateco to obtain the Cree Nation of Mistissini’s support.
A little later, down on paragraph four, this was noted:
At the public hearing in Mistissini, the chief of the local community, Richard Shecapio, indicated that the community does not support the Matoush project. Strateco intends to develop and deepen relations with the Mistissini Cree in order to respond appropriately to their concerns and eventually secure their support. The Grand Council of the Crees did not formulate a position at the public hearings.
Check out the NR yourself (1) to get the whole feel, but what this author took away from reading it was that RSC enjoyed support, support and more support for three paragraphs, but also noted some opposition to the project on paragprah four. In other words, a pretty normal state of affairs for a junior miner that will always have its supporters and opposition for a project but hopes that majority voices in support will prevail. The result of the RSC NR can be seen in this chart, as the stock rose 13.75% on strong volume Friday and closing just under a new 52 week high. 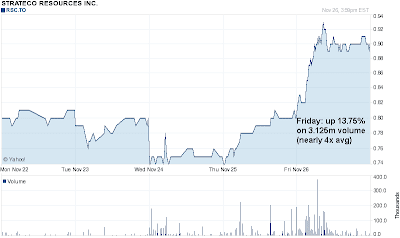 So far so good, but the reason MP mailed me was clued up in his mail title line “Compare and Contrast” because it also featured a report of the public hearings dated Saturday November 27th in the French language media “lapresseaffaires” (2) that paints a very different picture. On reading the report, even somebody with no previous knowledge of the issue can see the key for RSC’s project is approval from the local Cree Mistissini Nation and that the Mistissini have rejected the project in categoric terms. Here are a couple of excerpts (translated):
“The junior company has for three years tried to sell its uranium project to the inhabitants of the Cree Nation of Mistissini. Chief Richard Shecapio announced the response of the community during the public hearing last Tuesday: Mistissini opposes the project.
“The announcement visibly shook Strateco Resources management.
……..
“In an era when the social acceptance has become necessary for the survival of a mining project, this announcement is not trivial. “It was a big surprise for all of us”, admitted the President and CEO of Strateco, Guy Hébert.
……..
“On the eve of the public hearings, the Chief of the Mistissini, Richard Shecapio, convened a meeting so that his community could provide its views on the project. The participants voted 93% against. This is the decision that the Chief announced to the commissioners during the public hearings.
Citing in particular the long-term effects on the environment and animals, Mr. Shecapio explained that uranium exploration “goes against fundamental Cree values.”
The Chief said he was disappointed by the responses given by the mining company during the consultataion period. “Strateco has failed to engage the community. Strateco has failed to win the trust of the people.”
The Grand Council of the Crees, that groups together 10 communities, gave its support to the Mistissini Nation. In a communique Grand Chief Matthew Coon Come said that the Mistissini decision had not been taken lightly and had been made after years of reflection.
According to Mr. Coon Come, the Cree are open to mining development, “But the Mistissini community has judged that in the case of this project the potential negative impacts greatly outweigh the benefits.”
………
“We are conscious that the project will not be able to go ahead without the support of the Mistissini Crees” (said the Mayor of Chibougamau and project supporter, Manon Cyr).
IKN back. Now, I know what I know and I don’t know what I don’t. What’s more, The IKN Weekly is not the IKN blog and we avoid as much as possible the pontification and opinionating you see on the public site. In this case for example, I don’t know whether the French language website or its reporter have a political or social bias or a dog in this hunt, I don’t know whether the Mistissini Cree position is one that will never change or whether it’s part of a negotiation strategy, I don’t know anything about the previous track record of RSC, its Pres/CEO Hébert, its team or even its project up there in the cold parts of the world. Et cetera. But what I do know is that if the lapresseaffaires report had been published on Friday morning instead of Saturday, it would have had an effect on the share price action that day.
It will be interesting to watch how RSC.to trades on Monday. It will also be interesting to note how Hébert and his team respond to the lapresseaffaires report.