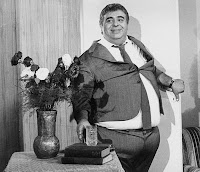 Argentine trivia: Name this famous actor
Background: Your typical Porteño (resident of Buenos Aires city) eats about 46 squillion times more meat than the rest of the continent. Smoking is very common in the city. As for alcohol, we’re in France-like consumption of wines, with spirits and beer just as popular. Then add the pizza culture, their love of ‘dulces’ and what you have is one very unhealthy diet which is reflected in the number of gutlords you see marchin’ in the streets.

Cut to the topic: There have been 82 deaths from Swine Flu (or AH1N1 if you insist) in Argentina so far, way above the rest of the region. The vast majority of those deaths are in the Buenos Aires region. Now check out this Bloomie report (yep, seems to be Bloomie day today…dunno why).

July 10 (Bloomberg) –– An unexpected characteristic has emerged among many swine flu victims who become severely ill: They are fat.

Doctors tracking the pandemic say they see a pattern in hospital reports from Glasgow to Melbourne and from Santiago to New York. People infected with the bug who have a body mass index greater than 40, deemed morbidly obese, suffer respiratory complications that are harder to treat and can be fatal.

With the new virus on a collision course with the obesity epidemic, the World Health Organization says it’s gathering statistics to confirm and yada yada continues here

Death by parrillada, anyone?