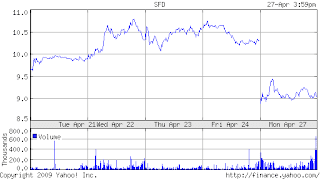 I would not like to be long Smithfield (SFD) right now
A plague a’ both your houses!
Romeo and Juliet, Act 3, scene 1 L91
RG over at The Mex Files alluded to this two full days ago and now it’s being picked up by some of the better mainstreamers. Ironic that while the USA tries to pin the blame on Mexico for it all, NAFTA and US corporate culture may well be the driving force behind the sanity lapse that caused swine flu to break out. Capitalist swine given a new spin.

The following extract comes from this report in The Times:

“…The Mexican Government said it initially thought that the victim, Edgar Hernandez, 4, was suffering from ordinary influenza but laboratory testing has since shown that he had contracted swine flu. The boy went on to make a full recovery, although it is thought that at least 148 others in Mexico have died from the disease, and the number is expected to rise.

“News of the infected boy is expected to create controversy in Mexico because the boy lived in Veracruz state, home to thousands of farmers who claim that their land was stolen from them by the Mexican Government in 1992. The farmers, who call themselves Los 400 Pueblos – The 400 Towns – are famous for their naked marches through the streets of Mexico City.

“The boy’s hometown, La Gloria, is also close to a pig farm that raises almost 1 million animals a year. The facility, Granjas Carroll de Mexico, is partly owned by Smithfield Foods, a Virginia-based US company and the world’s largest producer and processor of pork products. Residents of La Gloria have long complained about the clouds of flies that are drawn the so-called “manure lagoons” created by such mega-farms, known in the agriculture business as Confined Animal Feeding Operations (CAFOs).

“It is now known that there was a widespread outbreak of a powerful respiratory disease in the La Gloria area earlier this month, with some of the town’s residents falling ill in February. Health workers soon intervened, sealing off the town and spraying chemicals to kill the flies that were reportedly swarming through people’s homes.”