The link to cartoon strip people XKCD has been down there on the right for a while. Go today (here’s the link) and check out this pearl* in situ. 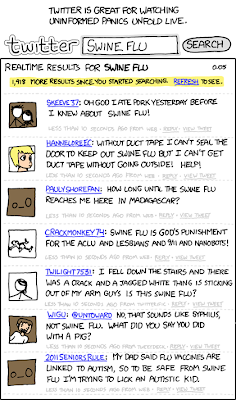 Iowa hog farmer David Lyons described the startling phenomena. “I came out of the house about six in the morning, and I saw three of my sows floating up in the air. They’d grown wings overnight and were flying?like really big birds. I was in such a state of shock I couldn’t move, but then they just flew off over that cornfield and that’s the last I seen of them.”

Experiences similar to Lyons’ have been reported by dozens of other hog farmers throughout the Midwest.

“Half of my hogs flew off yesterday to God-knows-where,” said Ted Zigler, a Kansas hog producer. “If this keeps up, I’m going to go broke. I’ll have to switch to growing Tofu.”

Like so many others, Lisa Conklin of rural Wisconsin said she never thought she’d see the day when pigs could fly. “I always used to say, ‘Yeah, that’ll happen when pigs fly. Now they are.”

Conklin expressed a concern raised by many Americans since the onset of Swine Flew. “Let’s just pray that monkey’s don’t start flying out of our asses.”

UPDATE: I’ve just found out the origins of the above thanks to the author comment below. The author is John Andreini and he deserves kudos (for the record I was sent the text as stands above in a mail with no link). Here’s the clicky linky to clickylink to get to John’s blog.