Nice to see you naming your sources, guys. Not.

This from today’s “Scotia Scoop” thingy:

“Scotia
Mining Sales this morning noting that Tahoe Resources is set to kick
off the year on the right foot with good news coming out of the
company’s newest gold mine, Shahuindo, located in Peru.  First of all,
we’re expecting the company to announce first
substantial gold production from the mine in the next couple of weeks –
rumour has it that the company has actually already “technically”
poured its first gold from the operation (and before Christmas to
boot!), however the amount was miniscule enough to not
make a big deal about it (ie. a major press release).”

There are others out there too in sellsideland, but your humble scribe likes the ones that read this humble source of cyberspace and pretend they don’t because we’ve always preferred full-asshole suits to the semi-asshole variety.
Okay other readers, to explain what goes on here…

1) On Tuesday IKN breaks news that should have been broken by the company
2) All the brokerages read the IKN post and immediately speed-dial THO HQ
3) Kevin, Ira and all their friends cover their embarrassing tracks by telling the callers the first pour was “miniscule” (sic) and “not worth mentioning” (which is total bullshit of course, it was a sizable pour and 100% material)
4) On Wednesday the lapdog sellside community fall into line.

So ends another chapter of Hunt The Sausage. Still nothing about the death at Escobal, though. Expect that to get buried in the MD&A.

PS: By the way Scotia, it’s not “miniscule”, it’s “minuscule”. And don’t bother me about the frequency argument either, ok? The disadvantages of a classical eddycation, innit. 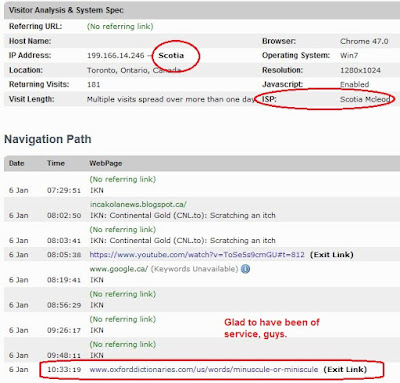