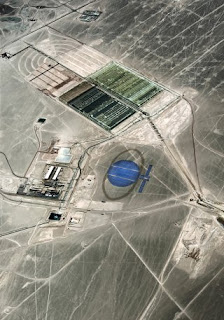 Mining operations are always highly polluting and the people who run them don’t give a rat’s hind quarters about the environment, you say?

Today President Sebastián Piñera inaugurated the world’s largest thermosolar plant at the State-owned Codelco’s Gabriela Mistral (aka Gaby) copper mine in Chile. The spec on the project is cool stuff, because not only will it provide 85% of the power needed for Gaby’s state of the art SX-EW copper plant (that produces around 150,000 tonnes of copper a year) but it will also mean 15,000 tonnes of CO2 doesn’t get put into our atmosphere each year. And perhaps the best bit is that it makes a lot of economic sense as well, because at a ticket price of $26m and scheduled to shave $7m per year off the company’s bills over its 10 year contract with Codelco, the hard-nosed capitalist beancounters are smiling too.
As someone who uses a (far more modest) solar panel system to heat his own hot water supply at home (nice hot showers and all for free, thanks for asking) your author stands up and applauds Codelco for its smarts. Fellow large copper mining companies, look to your own future and get wise about this technology.