Curiouser and curiouser, said Alice. This report from Globe&Mail yesterday (excerpt) brings us the latest happenings around Taseko (TBG)(TKO.to):

Investigators are trying to determine whether a leak of sensitive information from within the federal government prompted a sharp drop in value of the shares of a British Columbia mining company, the CBC is reporting.
Citing unnamed government sources, the broadcaster said Wednesday night that the Investment Regulatory Organization of Canada is trying to determine why shares in Taseko Mines Ltd., fell nearly 40 per cent on Oct. 14, more than two weeks before the federal government announced that it was blocking the firm’s plans to develop the Prosperity Mine, a development 125 kilometres southwest of Prince George. Continues here

Well, for my dos centavitos it’s about time the Canadian regulators did something about this company. For a start this post on November 3rd pointed out the current leaky boat problem with this permit denial. Here’s how that post ran:
Taseko Mines (TGB) (TKO.to): A leaky boat

Hey, remember all that flashcrash thing about Taseko Mines (TGB) (TKO.to) (“TKO”…geddit?) on October 14th when the stock fell a squillion or so on 23m shares traded? Well here’s the chart to yesterday…..

…..and here’s an excerpt of the news from Reuters today about TGB:

Nov 2 (Reuters) – The government of Canada has decided to block the development of Taseko Mines’ (TKO.TO) controversial copper-gold mine in British Columbia, Environment Minister Jim Prentice said on Tuesday.
Ottawa’s decision — based on “concerns about the significant adverse environmental effects” — overrules British Columbia’s provincial government, which had granted permission for the Prosperity project to go ahead.
The news hammered shares of Taseko Mines, which fell 25 percent to $4.89 in after-market trade in the United States.

And here’s the “extremely disappointed” TGB’s NR this morning. Seems the market was trying to tell you something after all, no? Oh by the way, Franco Nevada (FNV.to) is taking a bit of a bath on this news too, what with its royalty stream affected.

IKN back. But for those with a longer memory, it does seem that management have….errrr….ahem…something of an inside track on permit decisions previously. Back in January we ran this post that showed how Taseko management awarded themselves very large options deals the day before the original thumbs-up decision on the permit (the very same one that was subsequently overturned on November). Here’s that post pasted out for you:
Taseko Mines (TKO.to) (TGB): Lucky timing, boyz

As the old saying goes, Better born lucky than rich, proven once again by those lucky lucky directors over at Taseko Mines (TKO.to) (TGB) and their lucky lucky timing. On Jan 15th, this news release hit the wires that started….

VANCOUVER, Jan. 15 /CNW/ – Taseko Mines Limited (TSX: TKO; NYSE Amex: TGB) (“Taseko” or the “Company”) received the environmental assessment certificate for its proposed Prosperity Gold-Copper Project from the BC Provincial Ministry of Environment on January 14, 2010.
“Obviously we are tremendously pleased with the Provincial Government’s decision. We put considerable effort and Company resources into the documentation and process and to have now received this approval is both gratifying and rewarding,” says Taseko President & CEO Russell Hallbauer. 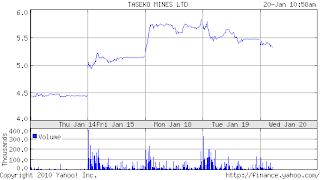 And by total, utter chance, look who awarded a whole bunch of options to themselves the day before that NR came out:

IKN back. Seriously folks, what’s going on here? Who were the people behind that October 14th flashcrash selling that happened just two weeks before the Prosperity project saw its permit denial? How did TKO management happen to time their options awards so amazingly well, getting them handed over the day before getting the original approval permit for the Prosperity gig? Inquiring minds………..

Time for a link to a new development (and thanks to JM for the headsup).

VANCOUVER, BRITISH COLUMBIA–(Marketwire – Nov. 25, 2010) – The British Columbia Securities Commission is reviewing a referral made to it by the Investment Industry Regulatory Organization of Canada (IIROC) regarding the trading in the shares of Taseko Mines Limited.
The BCSC does not comment on matters under review.
The B.C. Securities Commission is the independent provincial government agency responsible for regulating trading in securities within the province. If you have questions, contact Ken Gracey, media relations, 604-899-6577.