VRAE base, Peru: ain’t no gringos here…oh no no no no no no
In Peru right now, there’s a congressional investigation going on about the so-called Casas de ALBA (ALBA houses), a string of social support offices and drop-in centres that are dotted all around the continent but can also be found in the poor, highland areas of Peru.

Back in November, your humble correspondent noted in this post that Peru was trying to change its laws to make it much easier to chuck out bodies such as ALBA. So right now busybody congresspeople are snooping around all the ALBA houses they can to build their case. One of the places the suits have recently snooped is Copacabana… 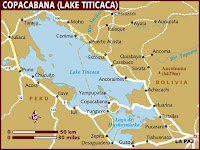 ….a small town in Bolivia just a few clicks from the Peru border where up to 14,000 Peruvians have reportedly visited in the past couple of years to get free medical treatment in an ALBA house run by Cuban doctors. Especially popular have been free cataract operations performed by the team there (cos Peru…err…doesn’t do that, y’see. No money = go blind in the land of democracy).

But the thing is, Peruvian congresspeople had absolutely no right to do what they did, namely go marching into Bolivia and demanding answers. So when Dr. Evo Morales got wind of Peruvians on his patch he threw a snarky barb over, saying that he’d like to send over a delegation to investigate the suspected US air base in Peru.

As thus Peru exploded (here’s a link to 192 Spanish language news stories in the last day), Twobreakfasts calling Morales an interference, the Defence Minister saying there was no airbase in Peru like there is in Ecuador, that Morales was talking rubbish, that he has no right to blah blah etc etc. Or in other words Peru once again acts like an immature teenager stomping its foot.

In fact, there might not be a formal US air base in Peru the same as the one in Ecuador, but anyone who hangs in the right places in lowland Peru more than a week knows the VRAE airbase, supposedly Peru soldiers only, is constantly packed full of US soldiers, planes, copters and air crew. So Morales gave Peru an ironic dose of its own medicine and Twobreakfasts just couldn’t hack it. The Twobreakfasts administration of self-congratulatory corrupt cronies finds it impossible to accept they cannot treat another sovereign state in the same arrogant manner as it treats its own people. Their shrill screams are laughable, and Evo does well to mock them as he does.

All power to Morales for sticking it to Peru where it hurts; directly in the pride gland. My stars they surely deserve it.