The ballad of Seafield Resources (SFF.v)

Once upon a time there was a tiny little junior called Seafield Resources (SFF.v) that was controlled by a proven market swindler called Ian Park. Said Park decided to run a bullshit pump and dump using SFF by drilling a hole specifically to con the naive in the market at the same time as hiring an unethical bullshit pumper by the name of James West to promo his gig. Go here for the story, documented on several posts including the insider sales, the promo crap, the pump, opinions from real mining people about the lowlife that is James West, the whole nine years 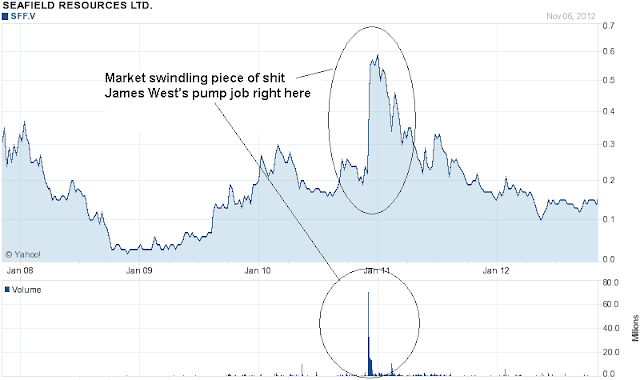 Once the pump was run, Park and West had made a shitload of money by scamming the poor naive souls who were stupid enough to believe these scumbags. They both retired from the SFF.v story and new, reasonably honest and decent people were brought in to try and pick up the pieces. The result is that even though the company changed its attitude and direction, even when it offers up reasonably decent exploration results (as in today) it’s totally ignored by the market and quite right too, as nobody in their right mind gets suckered twice by the same company and SFF’s reputation as a serious mining entity is and forever will be at zero, no matter what the current management do.
Moral of this story: Ian Park and James West are shits of the highest water. The end.