Via the excellent Aguachile blog, your humble scribe hears about this report from EIU (The Economist’s Intelligence Unit) which is a free download, you just need to fill in a simple form. House opinion here at IKN is that The Economist can be a bit hit-or-miss, with its LatAm coverage particularly patchy (to name two countries as examples, it does Peru well but is full of ideological claptrap on Bolivia). Aguachile likes the 48 page report and for sure it has some decent insight, but your author, simply by noting where the LatAm countries are (or are not) featured in the general ranking of the 167 countries has his doubts. Here’s that list, with local ranking to the left, where the country sits in the overall EIU ranking and then the country name: 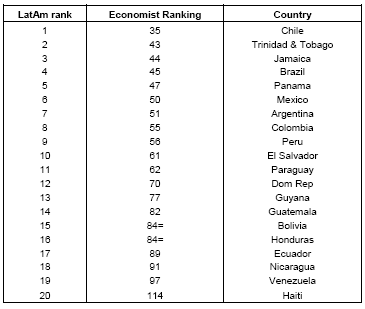 For a start, countries such as Uruguay and Costa Rica simply aren’t featured. Then we note that those old Brit colonies Jamaica and Trin/Tob get higher scores….a bit of wistfulness about Blighty’s grand past showing through at The Economist, perchance. But more significant is the way Chile (yawn) tops the local rankings again, despite routine police brutality and close government control of its press….or how Ecuador is marked down….or how Venezuela (you know that one) or how Colombia is higher than the “Axis of Evo” countries despite being (you know that one, too).
Summing up, the ranking smacks of samo samo, strong flavours of “nothing ever changes down there” (wrong, it does) and nuanced undertone hints of white man’s burden. Still, the greater report is detailed, up to date and is worth your time to download. After all, deciding for yourself is far smarter than listening to the opinions of a loudmouth blogger.