The Electrification Of The Nicaraguan Union (aka the Ram Power (RPG.to) re-capitalization)

I’ve always liked the conceptual of thermal power plants that get a long-term contract from their host government. And as a few of you out there know, I’ve followed Ram Power (RPG.to) quite closely without ever pulling the trigger and buying, because of its financials. The decision to sit out and wait/watch turned out to be the right one because last year RPG.to finally collapsed under the weight of its debt but I claim no prizes for avoiding, it’s hardly the only way I could have lost money betting on iffy balance sheets last year (for further proof, I check my own portfolio).
Anyway, the point of this post is to note how New Ram Power (for want of a better moniker) has apparently done a damned good job of marketing. It recently completed a round of re-capitalization raising to the tune of $74.4m and the new guys in (who get to walk in on the already built fixed assets) have diluted the previous shareholders to kingdom come as part of the gig. Well folks, that’s capitalism for you but what really catches the eye are the names involved in the re-cap: 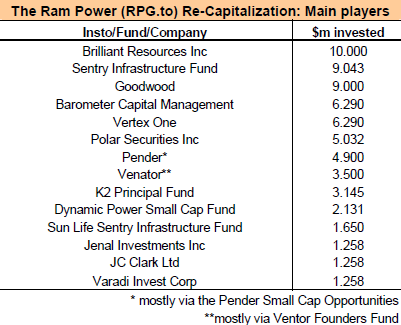 That’s a serious list of instos. That’s just the ones who stuck in over $1m each (there are other smaller players too). That’s $64.755m of the total $74.4m raise. And being able to raise $74m in this (so they tell us) tight market with that bunch of names on board is testament to the opportunity available, I’d vouch.
Bottom line: The big boys are in, expect a pump this year on Ram Power 2.0.