The IKN primer on the Guatemala elections this Sunday (from IKN 328, August 23rd)

This was a long feature in The IKN Weekly (where we do the real work) issue IKN328, from two weekends ago, on the upcoming Presidential and general elections in Guatemala set to happen this weekend September 6th. With the news this evening that President Otto Pérez Molina has lost his immunity from prosecution and has been ordered not to leave the country, the first part’s coming closer to reality too.
xxxxxxxxxxxxxxxxxxxxxxxxxxxxxxxxxxxxxxxxxxxxxxxxxxxxxxxxxxxxxxxxxxxxxxxxx
: Otto Pérez Molina may not survive
his term after all
It was
another tumultuous week in
politics. With the presidential elections now drawing near and current
President Otto Pérez Molina trying everything he can to remain in office to
make the transition smooth, three events rocked the fragile peace (with “everything he can” basically
meaning lay low, do nothing, keep out of view).
1)
President Pérez Molina’s (ex) Vice President Roxana Baldetti was finally arrested
for her role (I could put “alleged role” if you like, but there seems
little point in playing niceties as she’s guilty as hell) in the ‘‘ tax corruption
scandal (see Weeklies passim).
2) The big
one: The CICIG anti-corruption investigation body published its findings on the
President (9) (10) and accused him of being directly involved in the
multi-million dollar corruption scandal. The killer sound bite was (translated)
“There is no doubt that all
references to “One” and “Two” correspond to the President
of the Republic and to Roxana Baldetti“, referring to recorded
telephone conversations that use “one” and “two” as code
words for the people who are to be paid off by companies in return for avoiding
many millions of dollars in import duties and taxes. Even worse, CICIG has
called for formal charges to be made against the President, so sure are they of
the case.
3)
Yesterday Saturday three of his government ministers (Education, Economy,
Presidential Committee for “Competitivity”) resigned (11), saying
they felt betrayed by the President and left their posts feeling
“deceived” and “sad”. At the same time another
“President Must Resign” rally formed with many thousands of people
packing into ‘s main
square in front of the Presidential Palace (and yes, President Otto Pérez
Molina is in residence).
From
looking reasonably calm just a few weeks ago and weathering the storm of the
first round of the
scandal, it’s now once again nip and tuck as to whether Otto Pérez Molina survives
as President and gets to hand over power. Also, there are now serious calls for
the whole Presidential election to be postponed (12) until CICIG gets to the
bottom of the
scandal. For one thing the scandal has gone way beyond the President and his
party and affects all the main political parties now (for example, frontrunner
Manuel Baldizón’s campaign has been hit hard by accusations of corruption made
against his Vice Presidential ticket running mate, Edgar Barquín). But any
delay to the electoral process would mean above all that there would be nowhere
left to hide for the President and would be very bad news indeed for him and
the general country’s stability.
A focus on the
Presidential election
With all
that breaking last week, it’s now once again a serious and direct influence on
the Presidential election that’s just two weeks away, September 6th (assuming
of course the vote takes place, see above). It’s worth noting that
isn’t just choosing its next President on September 6th but is also voting for
a new Vice-President, 158 members of Congress, 20 new members of the Central
American parliament and mayors and town leaders for 338 municipalities. This is
a big vote day.
Therefore
I’d like to turn away from the current government’s scandals just a little
(because it’s still a big effect here) and take a good look at how the campaign
has developed, because there have been some very significant changes in the
race. We can of course consider the human political factors of this election,
but the real and practical reason for taking an interest on these pages
dedicated to mining companies in
is pure capitalism: We want to know whether there’s the potential for a trade,
with our main target being the heavily Guat-exposed Tahoe Resources (THO.to)
(TAHO) as a potential prime target for any buy-low-sell-high action.
I proposed
back then a call on a possible near-term trade/flip buy on TAHO, depending on
how the election looked. I’m bringing the analysis forward by a week because
there’s now a clear picture emerging and it’s something of a surprise, too.
The
centerpiece of this article is this chart, put together from the last three
voter intention surveys run by the n pollster Borge &
Asociados for the respected news and current affairs magazine
“Contrapoder” (literal translation “against power”, gist
translation “counterweight to power”). To give an idea of the survey
technicals, the latest survey taken in August and divulged to the public last
week August 21st included:
·
Adult males and females resident in

·
On electoral registered since 2011
minimum
·
Sample taken in proportion to voter
densities around country
·
Head to head questioning, voter
intention taken using simulated ballot paper/box
·
1,199 people interviewed
·
Margin of Error +/- 2.8%
·
Confidence level 95%
·
Dates survey taken August 7th to
13th
In short,
the right way to do a survey and Borge & Asociados has a reasonable
reputation for accuracy, much the way Contrapoder Magazine has a reputation for
editorial balance. But you’ll also note that the date of the survey closes
before the latest round of scandals hit. Enough blahblah, here’s the chart,
notes below: 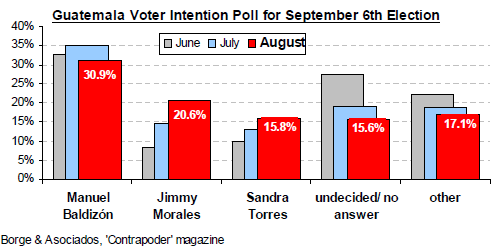 ·
Manuel Baldizón of the LIDER party,
one of the most established (and establishment) political parties in , is
still leading the polls but has seen his lead cut dramatically.
·
Jimmy Morales, running as an
independent, has surged in the polls in the last two months from under 10% to
over 20% and has moved into second place.
·
Sandra Torres, ex-wife of previous
President Alvaro Colom and from the ostensible political left (though hardly a
radical left wing, more straight centrist in reality) has also seen gains in
voter intention, but not enough to stop Morales from surging past her. She’s also
considered part of the political establishment.
·
The “don’t know/no
answer/undecided” column has shrunk by nearly 12% in two months, with more
people making up their minds which way to vote. And Baldizón hasn’t enjoyed any
of the new decisions.
·
The “other” column (made
up of several minor candidates with little hope of winning) has also shrunk as
people seem to be gravitating towards the main three candidates now.
·
The final bullet point (and one
we’ll come back to): As Guatemala requires 50% +1 vote for its President, it’s
now extremely unlikely that we’ll get a winner in Round One and we’re all set
for a second round run-off between the top two voted candidates that’s slated
for November 8th. Two hs between the two
votes may turn out to be an eternity in .
Now for
some analysis and what you see in visual form (or go to Reuters here (13) for
its take on the big electoral story) is the growing surprise that is Jimmy
Morales. Morales (wiki page here (14) is best known as an actor and one half of
a long-running comedy TV show duo in called ‘Moralejas’, in
which he stars along with his brother. They play a pair of cousins who get into
scrapes and then out of them again, it’s reasonable but simple stuff. Morales
has also appeared as a TV presenter. He also has some form in politics already,
as in 2011 he ran for the job of Mayor of the Mixco province in
and came third in the voting. But despite this background, supporters are quick
to point out that he’s no intellectual lightweight and left education with a
stack of qualifications. He’s also proved to be a formidable speaker and
debater in this campaign.
Despite his
apparent qualities, he’s still come out of nowhere. In December 2014 Jimmy
Morales didn’t even figure on the electoral radar. He then started a very low
cost campaign, mostly via Facebook and other social media plus some very
limited publicity space in the “normal” outlets (street signs,
newspaper ads) and to the surprise of many, was suddenly polling around 5%. The
campaign started to pick up the attention of some media and also of those who
were looking for a rallying point against the established parties and
candidates of always (in other words, the corrupt band of two or three parties
who pretend to be in opposition but in reality pass the power parcel between
each other).
In short
he’s picked up support and momentum as the outsider candidate (for what it’s
worth, “el outsider” is a phrase often used in Spanish for exactly
this type of political candidate) and has emerged from the pack as the one to
challenge the established political class. And when last week’s voter intention
poll results came out it reportedly shook the political establishment hard;
he’s now being taken very seriously eed.
His message is strong on the main issue of this campaign, anti-corruption.
Disaffected voters are congregating around him, often because they believe he
couldn’t possibly be any worse than the samo-samo options they’d have
otherwise. And it’s that part of the story, the “jail them all”
message for the
corruption class politicos and people in power that we on the outside should
most be concerned about.
As things
stand, the most likely outcome on September 6th is to see Baldizón (impossible
to be a more establishment politico) and Morales (impossible to be more of an
outsider) go forward into a second round run-off, with the vote on November
8th. And what happens then is anyone’s guess (at the moment pollsters have just
two points between Baldizón and Morales in a head-to-head runoff) but as my
original thesis of buying Tahoe Resources (TAHO) (THO.to) was on the back of a very
likely Baldizón victory and a return to the normality (bad, corrupt,
self-serving but normal) of n
politics, it’s now impossible to make that call. Bottom line, I will not be
buying TAHO before the
elections take place as it’s just too difficult to make a confident call.
One more
thing: Over the years (as you’ll recall, boringly) I’ve avoided an investment
in Tahoe Resources due to its prime weakness, the es’
Heel of being located in Guatemala. It’s also why I sold my .to
shares before the merger had completed, I simply don’t want to be exposed to
the country’s off-scale political risk. That call has been totally vindicated
by the stunning events of the past few hs,
but I’m also aware that on a micro-company basis, TAHO’s a great mining company
with an excellent asset in Escobal. What could really ruin it for the company
is a black swan event that nobody sees coming and I’d vouch that if Jimmy
Morales wins the Presidency and takes office (without being assassinated beforehand, as I do fear for his life now)
the chances of such a black swan event would be much higher. I’d also say that
Goldcorp timed the sale of its shares in TAHO to near perfection.
Bottom
line:
will be a fascinating place to watch in the next few weeks, but it’s definitely
a case of “look but don’t touch”. Avoid exposure to the country.