The inflation menace on weak-currency LatAm: a practical example

Here’s the chart of the Argentine Peso (ARS) over the past three months (basically 2009): 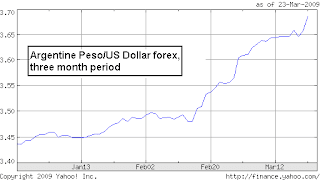 We can see the near 10% devaluation versus the greenback in this period. This is good for exports, of course……errrr…except that nobody is buying anything. This makes imports more expensive, but that’s not a real problem because….errrrr…nobody is buying anything. Hopefully both those situations will change, as LatAm as a block is a net exporter and therefore a net gainer from a recharged world.

But for dollar demoninated goods (eg world traded commodities) it means that locals will have to pay more for more inelastic demand goods things like wheat, porkbellies and fuel, even if they’re produced at home base. As our topical example, Critica today reports that fuel prices in Argentina have risen by up to 5.5% due to the softening of the local currency against the greenback.

The problem is not limited to just fuel and just Argentina, of course. With most of the regional currencies having suffered recently versus Uncle Buck, the phenomena of monetary inflation is starting to arrive on the shores of the continent. This is not something to ignore in the months ahead because the last thing a collection of emerging markets needs is a nasty dose of stagflation.