They were filed late Friday evening. Take a wild guess why. Here’s just the balance sheet: 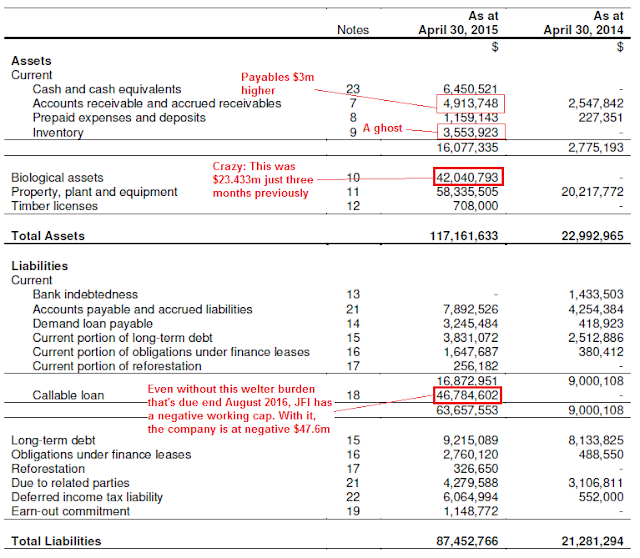 I honestly don’t know where to begin, but perhaps the first thing is to note the way JFI luckily managed to re-value its biological assets to the tune of $18m in the space of just three months, without adding a single pine cone to their asset, and in that way managed to add a $21m non-cash revenue item to their P+L which allowed them to declare an annual profit of $5.8m.
Or maybe the way they’re runninga $47m working cap deficit, with most of that owed to Bobby Genovese and due in August 2016.
Or maybe the way they say they’re going to pay back that debt in one of three ways:
1) “the realization of accounts receivable” ($47m…ain’t gonna happen)
2) “the realization of accrued receivables” (like i say, it’s $47m…ditto)

3) “the issuance of capital stock”

And that number three is the only way it’s ever going to happen. And that means, yeah you guessed already, a move by JFI to run the mother of dilutive financings so that Bobby G can walk off with his cash intact and leave a new bunch of suckers holding this bag.

Destined for much lower, don’t be Bobby G’s sucker.