The LatAm right’s idea of cultured debate and conflict resolution 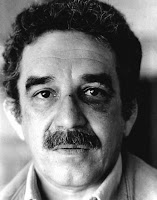 Just punch a guy in the eye as he walks over to greet you. And not any old dude, either. If you’re going to be a thug, why not be a thug to a Nobel laureate? And hey, great idea! As you know the person you’ve just violently attacked from out the blue is a good and kind person you know he won’t make a scandal about it and tell the world. Here’s the report that has finally come to light over 30 years after the incident between Nobel winner Gabriel García Marquez and the psychotic Mario Vargas Llosa and here’s a translated taster:

He (Gabriel García Marquez) went over to him (Mario Vargas Llosa) to greet and hug him. “Mario!” was the only thing he managed to say as a welcome, because Vargas Llosa greeted him with a punch that knocked him on to the carpet with a face covered in blood.

Violent attacks on friends without any warnings that were the result of irrational jealousy? Sounds like just the kind of stable character that the LatAm right wing admires….should make a great President of Peru one day. Not.