The Minister of Energy and Mining versus Jaime Pinto

Here’s a photo of today’s edition of El Comercio, Peru’s newspaper of record: 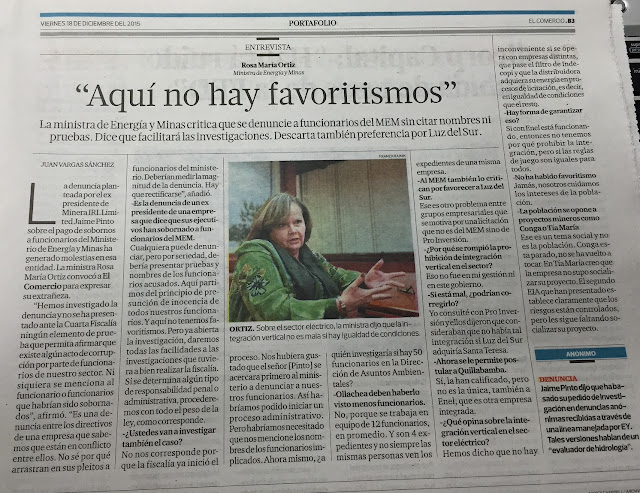 And yes, that’s Peru’s Minister of Energy and Mining Rosa María Ortiz, the country’s top dog in the sector, giving her views on the supposed corruption of MEM officials that Jaime Pinto denounced earlier this week. Here are a few choice phrases from Señora Ortiz:

“We have investigated the criminal charge and no element of proof (or evidence) has been presented to the court that allows us to say there has been an act of corruption by functionaries in our sector (ministry). The name or names of the people who have allegedly been bribed aren’t even mentioned.”

“Anyone can bring a criminal charge, but for the sake of seriousness
evidence should be presented and names of the functionaries being
accused. Here we begin from the principle of presumption of innocence of
all our functionaries, here there is no favouritism. But now that the
investigation has been opened we will offer all the help necessary to
the investigation that will be conducted by the public prosecution
investigators. If they determine there has been a criminal or
administrative event, we will proceed using the full force of the law,
as is due.”

Oh Jaime…look what you’ve done, Jaime…
And to think that Doug Jones and Robin Fryer thought that butter couldn’t melt in Jaime’s mouth. Helluva way to find out your people judgment is this poor, hey guys?

UPDATE: The El Comercio report is now on its website, link right here.