The Monterrico Metals torture case: Who is to blame? 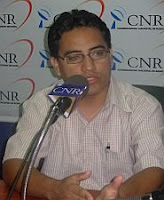 Julio Vásquez
That there was torture committed against 29 Peruvian nationals at the mining camp of Monterrico Metals (MNA.L) at Majaz (now named Rio Blanco) is now beyond dispute. But one of the issues is whether the protagonists were the personnel of Monterrico Metals or the officers of the National Police Force present that day. We know that both took part in the three days of torture against peaceful demonstrators who were lured into the trap under false pretences, but who gave the orders?

Today, light was shed on this part of the crime. Julio Vásquez, the reporter on the scene who was tortured along with the rest, spoke to Peru’s state-run CNR radio station. Here is an extract from what he said:

As clear as clear can be, Vásquez states for the record that Monterrico Metals was the brains behind the torture. How long will the company remain silent? Criminal charges need to be brought against this shameful company and damages should be paid to its victims. Is there a lawyer in the house?

UPDATE: Thanks to this post in the blog ‘Huanca York Times’ (a finalist for Peru’s best regional blog this year) you can see a report on Peru TV about the Majaz torture with an in-studio interview with Julio Vásquez. Recommended viewing for Spanish speakers, as it does a good job. Salu2 HuancaYork