The only vaguely dramatic thing about Bolivia’s election today

Yes we know Evo’s going to win and we know Bolivia’s a big success story under his government and we know he’s changed the rules to run again and isn’t that naughty and we know that the North much prefers to quietly ignore Bolivia’s strong growth and improved living standards on a multitude of criteria because it’s all a bit embarrassing to be shown up as wrong now isn’t it mister capitalism?
La la la. No, the nice bit today is when people started to notice that some of the ballot papers for the election have got the name of the country wrong: 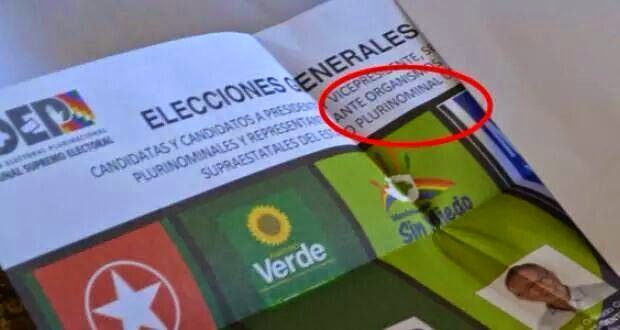 Yes, that’s one of the millions of official vote papers printed by the government office in question and already in at least three locations they’re reported as having Bolivia’s official country name as “Estado Plurinominal de Bolivia”, when it is in fact officially and correctly “Estado Plurinacional de Bolivia*”. So, apart from the country getting the name of the country wrong, all’s in order. And here’s me complaining about people up there writing Columbia instead of Colombia.
*The same way as France’s official name is République française, for example.