The Osisko (OSK.to) Goldcorp (GG) deal: Please allow IKN to translate the latest tweet from Andrew McCreath of BNN because…

…IKN Nerve Centre™ agrees with his take (and as a couple of mailpals know, said as much pre-bell today). Here’s his tweet: 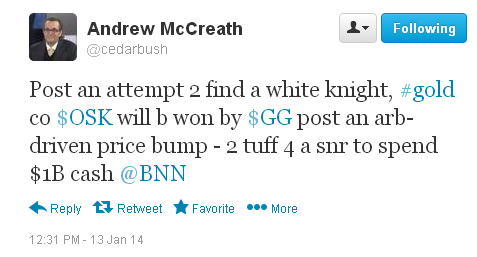 That says, “Apart from an attempt to find a white knight (i.e. friendly third party who will pay more), the gold company Osisko Mining Corp (OSK.to) will be bought out by Goldcorp (GG) once a second sweetened bid is offered by Goldcorp. It’s too difficult for another senior, Tier 1 mining company to spend one billion dollars in cash at the moment”.

What that means in something approaching normal English is that Goldcorp (GG) has pitched its bid nicely for Osisko (OSK.to), but ostensibly at least it’s a non-solicited bid (though the chances that GG didn’t talk with OSK and try to get a friendly deal done before today aren’t very high at all) so the OSK board will almost certainly say “not offering enough”.

So, what happens from there? Basically one of four things:
1) GG doesn’t offer any more, nobody else turns up to make a counter, OSK holders don’t bite, deal fails. This is rated as an unlikely though possible scenario.
2) GG sweetens the deal at least once, maybe twice, finally getting OSK people on board. Deal goes through. This is the most likely scenario and it’s the one the market has baked into the pie today by bidding OSK.to up to $6.20 or so.
3) GG sweetens the deal once or twice, but OSK doesn’t bite and still refuses the offer. Nobody else shows up then after a battle the shareholders either side with the GG offer and the deal is done, or they go with their board and it all falls through.
4) OSK gets a second offer from somewhere else and a bidding war starts for control of OSK. That counter may be unsolicited or a White Knight found by OSK. This is rated by your humble scribe (and by McCreath, it seems) as a possible, though substantially less likely than scenario 2 above. Here’s something I wrote here on the subject earlier and covers the bases well enough:

It’s a bold move by GG, though. On balance i think they’ve pitched the offer well, it makes enough (not total) sense and i agree they’re the best fit for this one, too. ABX has enough on its plate disposing of assets without ponying up for a new mine, working or not. NEM is the only real alternative I see. Others are maybes but only as white knights if the affair gets messy.

All in all, it’s the type of M&A action that the mining industry needed at this point and if only for that, GG should be applauded. A nice chunky fight with billions of dollars in play, rather than a few million as seen in other recent deals. I like it, game on.

UPDATE: More reco’d reading is the VancVenture take on OSK/GG, but you must be fluent in ironese to see his greater point. Nice post, PSDave.