The other part of the Argentina media BS show: The local media regurgitation

On Saturday this humble corner of cyberspace showed how Bloomberg frames its anti-Argentina/anti-Cristina editorial line by being careful about the facts it chooses to present and preferring not to give context. In this way its biased reporters such as Camila Russo, author of the flimsy and unbalanced hit piece, can scream dire nastiness without bothering about normal journalism ethics. Bless their hearts.
However, there is another part to this media game in LatAm, that’s the way in which this biased nonsense itsthen rebounded in the local press. Here for example is the front page of the print edition of Clarin (famously  anti-CFK and Argentina’s biggest circulation newspaper) that greeted Argentina on Saturday morning. 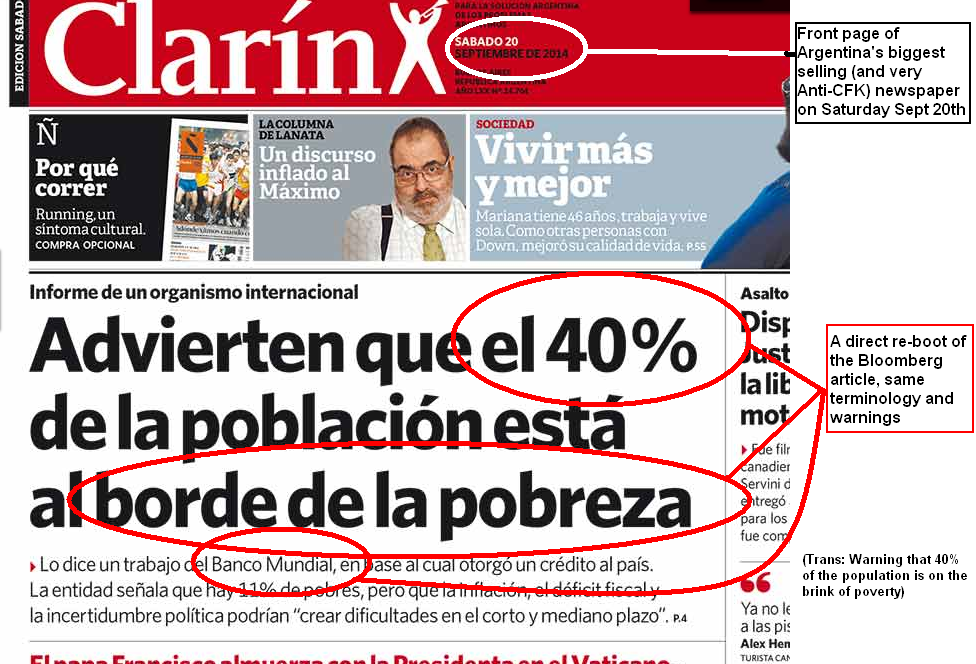 Yup, a direct re-hash of the Bloomberg note. And what’s more, you read the whole Clarin report and it makes it plain the screaming headline comes directly from the Bloomberg report as paragraph three begins “As reported by the Bloomberg news agency…”. But in the very same way as Bloomberg, Clarin’s re-hash skips over the facts (not opinion or cherrypicked data, but facts from the very same World Bank from IKN Saturday)…

Argentina has 10.8% in the poor bracket, then 31.4% in the vulnerable column and that’s how Bloomberg gets the “quadrupling” word into its headline. But what they don’t tell you is…

And this is how bullshit becomes accepted knowledge among the mouthbreather opposition forces in South America (because sadly, this pattern is all too common in most of the region). It goes