The people getting rich off the tinfoilhat brigade 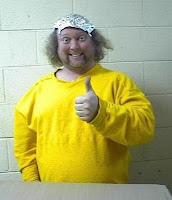 Ted Butler is a charlatan. Look at this chart: Where are the Ted Butler Comex Gold manip lessons, or the Ted Butler LME copper manip lessons? THEY ARE EXACTLY THE SAME CHARTS! Silver’s rise is a product of true supply and demand, not some rigging done by the middle men that sit between you and the metals.
So what happens with Butler, or GATA, or that brainless twerp Jim Willie, or that religious nutcase Jason Hommel is that they call the metal’s move correctly. OK fine, not going to deny them that, but first they call a basic binary trade right for all the wrong reasons and they then lump on all the ridiculous baggage they want because they called the metal right.
It’s bullshit. Look at copper, man! Look at the inverse relationship gold and silver has with the US dollar! 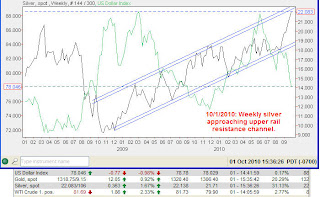 chart courtesy sez_me_man (someone who’s worth listening to re silver)
But these people will never, ever tell you that because they all have their own neat and profitable scams going on, namely “sell that newsletter”. They attract thousands upon thousands of conspiracy theorists that WANT to believe all this shit and feel justified by a price movement that’s utterly out of the control of the so-called manipulators over the longer term.

Basic point: If gold/silver whatever were successfully manipulated, they wouldn’t have gone up.

Now, I’m not saying there is no manip in the market because there is. Always has been, always will be. But 1) it’s not illegal, 2) they can affect things over a shorter-term and not over long periods because 3) nature abhors a vacuum and will seek to fill in any market advantage offered (look at the GBP and George Soros…he didn’t manip the GBP to win his multi-billion dollar bet, he saw the manip that the UK govt was doing and simply took the other side of the trade).

These people aren’t stupid, they’re sly. They’re on to a good little thing and so stoke the fire as much as they can, thereby parting the innocent and gullible from their hard-earned cash. They make me want to vomit, the lot of them.