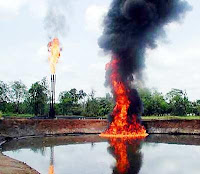 I haven’t posted on this story much, but now that it’s becoming big it’s high time I got my finger out and said at least something.

The basic story is:

There’s lots more to it, of course (for example the threat to supposedly protected indigenous communities that are watching their right to isolation get trampled upon), but that’s where we are today, people. Here’s a BBC World report that has the latest from a region that will never (and I repeat never) allow oil companies to operate. The combo of massive rejection of the oil business and the extreme isolation of the region makes it almost impossible for companies to operate successfully over a longer time period. The thing is that the oil companies have gone into these deals mainly in good faith; they’ve been promised that “the locals will behave” by Twobreakfasts and now the fat arrogant bastard is losing face with the international business community. This does not bode well for the safety of the locals when Alan sends the army in, sad to say.