The Queen of Argentine Politics isn’t its President 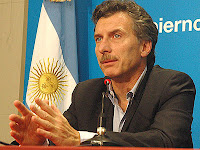 Macri being all serious and politico
Mauricio Macri is Mayor of the city of Buenos Aires. In the patchwork quilt* that is Argentine politics he’s regarded as a right-wing defender of the middle classes and his position is one of “love him or hate him” in the city and the wider country.

But along with all the baggage he brings (he’s son of a rich magnate, he was president of futbol club Boca Jrs for a long time, he was kidnapped when young and held to ransom etc) he’s also convinced himself along the way that he can sing, even taking professional lessons back in 2007 to top up his…..errr…ability.

And now we get to the crunch. At his recent 50th birthday party, Macri got up on stage to perform “Somebody To Love” by his favourite band, Queen. So sit back, relax and treat yourself to two minutes and forty seconds of the Mayor of one of the largest cities in the world and early frontrunner as the next President doing his very own Freddie Mercury impression.

*as mentioned previously, it’s very difficult to use classic left-right labels in Argentina mainly due to its strange Peronist history. The definition above is a rough approximiation and no more.