Newmont, Barrick and Randgold (and Goldcorpse)
It’s not the just week
of Monday September 24th that matters in the biggest sector merger
of the last decade, the effects of the Randick (ABX, GOLD) deal are still
working their way through the market and the last two weeks have been
particularly interesting. There’s a distinct and clear multiplier effect that’s
taken over on the deal and turned it from merely groundbreaking into an unmitigated
success, ABX chair Thornton must be feeling pretty pleased with himself this
weekend s he plays with his pocket calculator and works out his year-end bonus.
The crux of the matter
is in this chart, the comparative market capitalizations of “Randick” (ABX and
GOLD combined, with the assumption running back before September 24th)
and the two other biggest publicly traded gold miners, Newmont (NEM) and
Goldcorpse (GG). In fact these days GG is way behind in the market cap league
table and the only real comparative is NEM, but it doesn’t hurt to fill a
little extra space on this chart:

Back before the deal was
announced, NEM was the biggest single company out there (and by quite a
distance), but if we add ABX and GOLD together (in hindsight) they had about a
billion and bits on NEM. GG was a long way back in third as it revolved around
the U$9Bn mark. Then came the deal and in that first week, the market applause
for the deal saw Randick add around $2Bn more to its market cap than the ticket
deal (I’m sure you remember the way it was framed as an U$18Bn merger, with 12
from ABX and 6 from GOLD, by the end of week one that was U$20Bn).
However, since then
things haven’t stopped and as you can probably make out from the above chart,
Randick has seen its market cap accelerate away from the others even further. I
say “probably” because it’s not so easy seeing just how dramatic that change
has been on the comparative chart. But in this one below the focus is sharp: 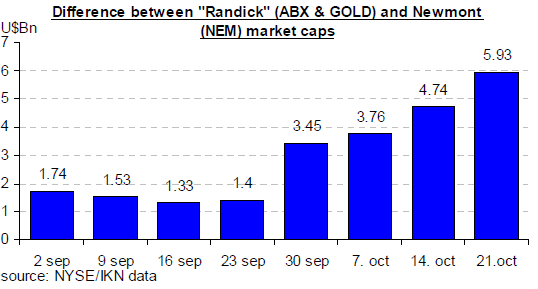 Here we eschew GG, take
on the top two and perform a simple subtraction to show the difference in
market caps between Randick and Newmont. Up until the week of the Denver Gold
show NEM was closing in on the combo, but then the gap grew. Then grew even
further and today Randick is nearly U$6Bn bigger than NEM. Of if you prefer, in
just four weeks the gap has grown by U$4.5Bn and to put that into as clear a
context as possible: That’s the market cap of sector darling Kirkland Lake.

The point: What has
happened to Randick is a classic case of the whole being greater than the sum
of parts. The market LOVES this deal, it’s created a mega-precious-metals-miner
at just the right time that of enough size to attract new and bigger insto
money to the stock. And let us be absolutely clear; if a pissant blogger can
spot that Randick has added an average of an extra billion dollars a week to
its market cap compared to its biggest rival, you can bet that biggest rival
and all the other smaller ones, right down the line, have noticed it too.
Newmont, Agnico, Goldcorpse, Kirkland,
Royal Gold, Franco-Nevada…you show me you preferred PM name and I’ll show you a
board of directors suddenly under pressure to Do Something from a whole bunch
of major holders who are turning green with envy about Randick.
It’s not just the
initial reception of Randick that makes it a near-certainty we’ll see more
consolidation and M&A deals in the higher echelons of the mining space,
it’s what has happened in the last couple of weeks as well. Randick has
streaked into a size lead compared to NEM and all others, the only way they get
their mojo, their #1 position and their kudos back is by emulating Thornton and
Bristow. On that score, I will again put in a word for two M&A scenarios I
like; Firstly and probably more difficult, Agnico (AEM) and Goldcorpse (GG)
have enough in common and enough that separates them, plus CEOs who are
personal friends. The second is the one that still sits up and begs at me,
because Newmont would get tremendous upside benefit from buying B2Gold (BTG) at
its current price and BTO (holders myself included) would go for 1) the premium
price put on an all-paper deal and then 2) the type of out-sized ramp in the
weeks that followed. If B2Gold emulated the rise enjoyed by Randgold these last
four weeks on a NEM deal, it would be a C$4.40 implied stock price. I’ll take
that.