The Summit of the Americas: A primer 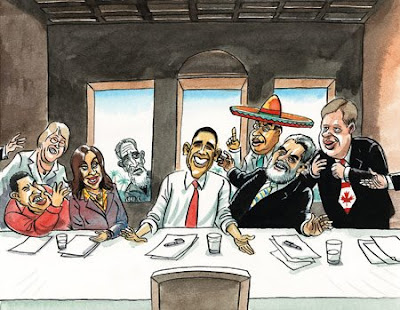 Thanks to The Economist, IKN no longer feels obliged to writing a long preview of next week’s Summit of the Americas that happens in Trinidad and Tobago on April 17th to 19th. Here’s the link to the Economist article, recommended as a nice’n’concise way to get the issues clear before the bunfest starts (top of agenda will be Cuba, Cuba, Cuba and sadassed Miami residents’ rabid reaction to Cuba) and also gives a neat background to the fiasco (The Economist’s word, not mine) of the last SotA in Argentina, 2005.

Finally, while checking out the script make sure you note something about the illustration that accompanies. As well as the attention to detail (Lula’s missing finger) the Canadian dude is so unknown outside his borders that the cartoonist feels obliged to slap a red&white maple leaf on his tie. Sad, innit?