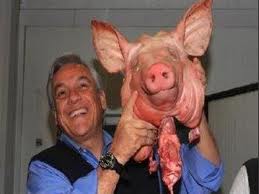 …definitely isn’t his political philosophy, it isn’t all that saving 33 miners thing and it isn’t his business acumen or large net wealth. Nah to all that, cos the thing I most like about President Sebastián Piñera of Chile is that he’s a total freakin’ dumbass when it comes to diplomacy. From DPA newswire today (translated):

The President of Chile, Sebastián Piñera, put his foot in it on the last day of his European tour by writing an incorrect comment in the visitor’s book of Germany’s Presidential Palace while meeting on Saturday with the German Head of State, Christian Wulff.


Piñera wrote “Deutschland über alles” on finishing his meeting in the Bellvue Palace in Berlin, the phrase that began the old German National Anthem, closely related with Nazism and carrying the meaning that the German race is superior to all others.


The current National Anthem does not have this line and what’s more, Germany today  penalizes any sort of apology for Nazism. CONTINUES HERE