The throat of fire and thoughts of longer time 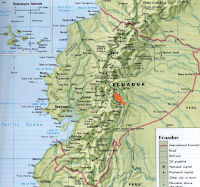 The red arrow marks the spot
Ecuador’s Tungurahua volcano is rumbling. Over the last 24 hours seismologists that monitor the volcano with a Quechua name meaning “throat of fire” have noted dozens of small seismic movements consistent with magma upflow. A 4km high cloud of gases and dust has formed above the crater.

The volcano is one of the most active in the Andes and woke up from an 80 year slumber in 1999. This photo taken in 2007 shows what it’s capable of at the moment.

About 5km away lies the town of Baños and its 25,000 people will be alert to the possibility of (yet another) evacuation. As Quitos is just 87km North of the volcano, finding a friendly roof shouldn’t be too hard. On the other hand, if the volcano gets too busy and the wind blows the wrong way, who’s going to look after the population in the capital?

Hey ho, all part of the fun of living on top of a rapidly rising mountain feature (in geological timescales, at least). It certainly reminds me of my favourite quote from the magnificent book “The Earth, An Intimate History” by Richard Fortey. The quote that follows is not some sort of evangelizing about global warming, by the way. Taken in the context of geological time the whole issue becomes vastly more philosophical. In the words of Fortey;

“Mankind is no more than a parasitic tick gorging himself on temporary plenty while the seas are low and the climate comparatively clement. but the present arrangement of land and sea will change, and with it our brief supremacy.”