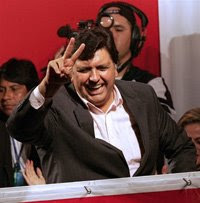 García spots the breakfast waitress in the crowd
Why M.O.? Because it’s as close as dammit to criminal. This is how the slob works:

First note this report of Southern Copper (PCU) and its 3q08 conference call on October 28th, when PCU head honchos specifically said that the Tia Maria copper project was on track, would be built, there were no delays, they’d already invested $569m of the approx $1Bn total estimated capex etc etc. A couple of choice quotes from the CC about Tia Maria, as reported by DJNW:

The company said that it will continue with its current investment projects in the Tia Maria and Toquepala mines, despite ongoing market turmoil.

“I don’t think that delays are going to happen,”

As of Sept. 30 the company had committed $579.8 million for the Tia Maria project. Company chief executive Oscar Gonzalez Rocha said in the conference call that the total cost of that project in Peru could be about $1.0 billion, and that it is scheduled to be up and running by the end of 2010 or the first quarter of 2011.

I could continue, but you should have the message by now. Cut to last Friday, and in front of 800 of Peru’s elite bizpeople at the APEC summit President Twobreakfasts said the following:

“Tía María cannot come to a halt, Mr Oscar González. “If it comes to a halt, we will have to look outside the country to sell it again.”

So in Alan’s pathetic little world, when PCU comes out with a confirmation that Tia Maria is on track in the next few days he can say “Look, minions…I am all powerful” or somesuch, even though PCU confirmed their plans to the general public just three weeks previously. I mean, what a freakin’ asshole! The dude is a deceptive shit, be clear on that one.

His 19% approval rating is not a statistical freak.