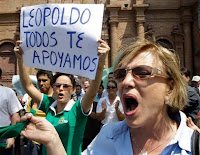 Leopoldo Fernandez is the Pando prefect now under arrest awaiting trial. Note the two overriding colours
of his Bolivian supporters; white (skin) and green (separatist flag)
Rodolfo Mattarollo is the Argentine lawyer who headed up the Unasur fact-finding commission in Pando, charged with investigating what exactly happened on September 11th this year (sidebar..what is it with that date?).

Here’s the link to a report by Argentina’s Pagina 12 newspaper about the advance presentation Mattarollo made to dignitaries yesterday. I’ve translated the first part below, but quite honestly I don’t feel like translating any more. Read for yourself and find why. You can always run the link through Google translator if you Spanish isn’t up to scratch and you want to read the whole article.

With tears in her eyes, she remembered how a group of “men from the city” burned alive one of her colleagues last September 11th. Next to the burned body, the woman’s baby was crying hysterically, she narrated. Enboldened by the wails and discontrol, they picked the baby up by the legs and shook it and, as it wouldn’t stop crying, shot it in the head.