The United States of Colombia (really)

Over at Just the Facts, they’ve put up this excellent post featuring a whole bunch of old 1890’s postcard maps of the LatAm region. Here’s a bit of the blurb written:

In the 1890s the Arbuckle Coffee Company promoted its product by including a 3×5 card depicting a U.S. state or foreign country.
Here are some of its cards of Latin America. They are often beautiful images of jungles, wilderness, and people performing mostly agricultural or mining tasks. (Peru, for instance, is all about quinine and guano.) Buenos Aires is the only city in evidence. Populations are one-tenth or less of what they are today. The boundaries on the maps have changed quite a bit.

The JTF post is highly recommended (go now) and all the cards quite beautiful pieces, but I couldn’t help being struck by a bit of irony in the Colombian card: 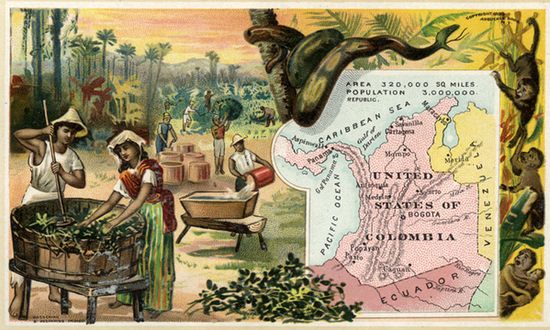 Yep, that does say “United States of Colombia”. La plus ça change……