The world’s best performing stock market in 2008 was………

Don’t start spreading it around though. Wouldn’t want to upset anybody. 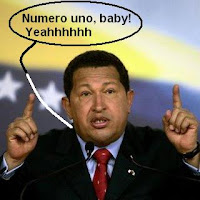 2008 was a year to forget in all global stock markets, in fact of the 43 stock markets that your diligent Otto has managed to track, not one of them ended up in the positive column. However the ‘best of the bad lot’ was Venezuela, which lost just 7.85% over the year. It’s also noticeable how well LatAm did compared to other places around the planet (relatively speaking, of course…maybe ‘least bad’ is still the best phrase) with all the top four coming from this neck of the woods. Venezuela, Chile, Mexico and Colombia were the only bourses that managed to drop less than 30% on the year…I suppose that’s some sort of achievement.
Anyway, here’s the full world chart (pity eastern Europe, oh gosh China and whatever happened to miracle economy Ireland, eh?)…

Click to enlarge
…and here’s the breakdown of the seven most important local markets (e.g. Ecuador’s microbourse isn’t included). Note how Brazil sucked compared to most.

Click to enlarge
Also note just how well “Investment Grade Peru” did over the 12 months (and excuse me while I guffaw at S&P and Fitch and mumble “toldya so, suckaz” under my breath).

Finally, for those that like their data, here’s the full table with percentages and everything.

All data culled from this Spanish language link.