This blog is a US election-free zone 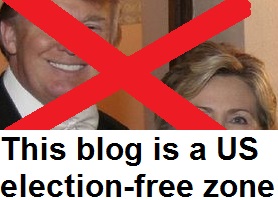 As you can see in the top-right hand corner of the blog homepage*, as from today we have an official house position at this humble corner of cyberspace. Taking into consideration that…
…as from this date to the close of voting, IKN will not offer any sort of political opinion on the race to be the next President of the USA. It would be greatly appreciated if this fact were taken into account by those people with the urge to write into IKN Nerve Centre between now and November. Thank you for your comprehension, kind reader.